Neurosis set to reissue Enemy of the Sun 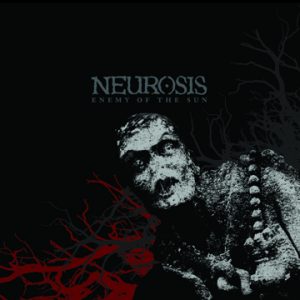 I can’t believe it has been 17 years since Neurosis‘ amazing Enemy of the Sun album came out. I remember receiving it as a promo to review in my zine at the time and also going to see them play at Lounge Ax as they toured for this album (with the mighty Dazzling Killmen as the opening act for that particular show). That show was one of the most intense and powerful things I have ever witnessed and in the 17 years that followed Neurosis never failed to live up to that power each and every show.

To celebrate a quarter century as a band, they are reissuing the album on their own label, Neurot Recordings. The album will feature the two bonus tracks found on the overseas edition of the CD and will be sporting all new cover art (shown in the photo here). I still give this album regular plays and it stands as one of the heaviest records ever made. Songs like “Enemy of the Sun,” and “Raze the Stray” are masterpieces. Here’s the official release:

Neurot Recordings is proud to announce the reissue of one of the most groundbreaking releases in the ever-expanding lineage of icons Neurosis, Enemy Of The Sun.

With Neurosis’ earlier releases — 1987’s Pain Of Mind, and even 1990’s The Word As Law — the band’s jagged and eerie blend of metallic, hypnotic, post-gutter punk was instantly recognized as wholly unique, yet it took multiple releases for the then Bay-area unit to infinitely define their sound, forcing the world to listen, then run for cover. Their 1992 full-length Souls At Zero showcased the band branching off into much more expanded songwriting, giving birth to much longer hymns, infusing them with tribal rhythms and slow-building post-doom bastardization, then breaking massive new ground for the metal world.

But it was their follow-up in 1993, the crushing Enemy Of The Sun LP, that would be the album to take the pulsing, hypnotizing monoliths Neurosis was crafting down to much darker, and much, much heavier territory for the rest of the band’s still-growing roster of masterpieces. Still to this day, critics and fans of heavy and experimental metal hold this release to be one of the harshest, spine-chilling, mind-warping releases in history, and countless acts have cited Enemy… as “the one that changed everything” for them.

The eight tracks on the release was one of the most massively cavernous, crushing records the world had experienced. A mesmerizing, pressurizing, dirge-driven display of brutal riffing, thick with haunting samples, layered, anguished vocal tracks, raging multiple-member percussion contributions, and some of the most mammoth buildups ever, Enemy Of The Sun was an album that left a sense of anguish in your soul long after the record was over.

Neurot Recordings are exceptionally proud to celebrate the 25th anniversary of Neurosis, and once again issue this classic album to the masses. 2010’s reissue of Enemy Of The Sun bears a fully redesigned package by visionary artist, Neurosis live visual master Josh Graham, and will be released worldwide on August 30th, 2010.

I tell you if they do vinyl of this I’ll be all over it even though I own the original! For good measure I’ll leave you with this video of Neurosis performing “Raze the Stray”.