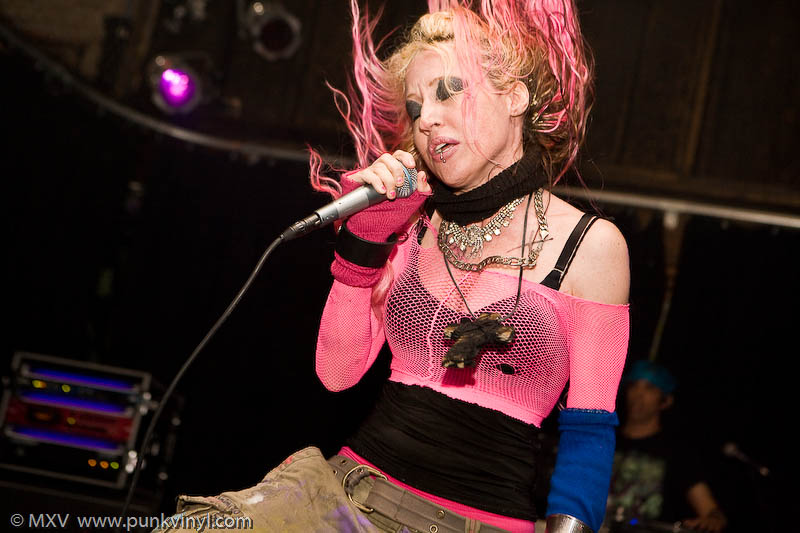 Last night the System of Freaks tour made a stop at Reggie’s here in Chicago to present a show featuring six bands with the headliner being Mary Magdalan. This show was sponsored in some way by the Suicide Girls and one of them, Pandie Suicide,  was the emcee for the evening and apparently the only one of them at this show.

Dies Mali was the band picked to get things started. They were a gothic style metal/rock band that played heavy mid tempo songs. They seemed a little amateurish so it’s possible they haven’t been around that long. They wasted two songs of their seven song set on covers of the Offspring and Static X. Static X?! Was there anyone in the crowd last night who even remembers that flash in the pan band for the five minutes they were popular? Perhaps the most unnecessary cover song ever. Their singer would also leave the stage between songs instead of talk to the crowd which was equally weird.

Lollypop Tragedy played second. Their guitar player was painted up like some sort of weird cross between Peter Criss and King Diamond. He stuck his tongue out all the time like Gene Simmons too! The band must really like early Marilyn Manson a lot because that is exactly what they sounded like right down to Lollypop’s singer sort of looking and singing like a heavier Manson. The band even did a cover of Marilyn Manson’s cover of “Sweet Dreams” which was played exactly like the Marilyn Manson version. That may be a first in rock music, a cover of someone’s cover. At one point near the end of their set they brought three girls from some place called Factory up on stage to dance during their final songs. These girls danced in skimpy outfits and/or their lingerie. That was easily the most entertaining thing about their set.

Rikets quickly followed and were a breath of fresh air after the first two bands. They played really tight metal hardcore that was hugely energetic and pounding. The singer stalked all over the stage and looked like he was going to burst a vein in his head as he screamed and growled his vocals over the relentless pounding his band mates were delivering. They were pretty entertaining and seemed to wake up the small crowd that had gathered up front.

Minneapolis MN’s Blue Felix started the second half of the bill by setting up a lot of gear on stage including a big metal keyboard rig.  The band members were all painted up or wearing costumes which made them interesting to look at. The band played fast tempo metal/hardcore rock. The vocals ranged between some typical yelling and some slower, deeper singing which worked rather well and was a nice change of pace over the typical formula of pounding and yelling constantly. The band were really tight and put on a good show and their singer was a pretty strong front man with a lot of energy and a good attitude. They were definitely worth checking out or showing up early for if you are attending one of the shows on this tour.

Chicago industrial band, Fashion Bomb, started the home stretch. They played heavy industrial rock that was heavy on the rock and light on the electronics. The singer talked a lot between songs, mostly either asking the crowd to form a circle pit or asking them to buy something. He seemed to have a friendly stage demeanor however their set seemed to lack any kind of excitement after the ball of energy that was Blue Felix. They should have switched places on this bill and perhaps Fashion Bomb would have fared better.

Everyone in attendance moved up front in anticipation of Mary Magdalan taking the stage. After the band finished setting up they turned off all the stage lights, put out a little smoke and had their own light show to decorate the stage with. The band is a mix of electronica, rock, and hip-hop and led by a female vocalist who raps, sings, and even yells. The music was fast tempo, somewhat repetitive, and sometimes groovy. The girls in the audience were obviously big fans as they danced in place, sang along and pumped their fists. Mary stalked the stage and whipped her hair about as their bass player creepily stalked around as he pounded his bass while being painted up to look like the Joker from The Dark Knight. They were hugely entertaining and pretty unique and are probably going to gather a larger following in the near future. After the show was over there was an after party scheduled at the bar next door for those who didn’t have to be anywhere early in the morning.

Additional photos from this show are available in the gallery here.