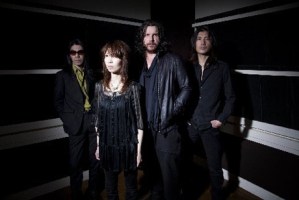 Japanese rock heavyweights, Boris, have announced an they have teamed up with The Cult’s Ian Atsbury (let’s try and forget he also was recently singing for “The Doors”). The official announcement is as follows:

Southern Lord proudly announces an incredible collaboration between label artists Boris and Ian Astbury of The Cult and The Doors! This finely-crafted four-song mini release, simply entitled BXI, was tracked and mixed in Tokyo in late April. Astbury’s vocals are a perfect match for Boris’s straightforward, laid-back, but still raw and imaginative songwriting constructed for the EP; another intriguing display within the band’s ever-morphing, extensive résumé of releases, tours and collaborations.

This past weekend, Ian Astbury made an unannounced appearance with Boris at the band’s performance at Sydney, Australia’s Vivid LIVE appearance, blowing fans away with this unexpected set which showcased some of the material from the BXI EP as well as a cover of the classic “The End”, by The Doors.