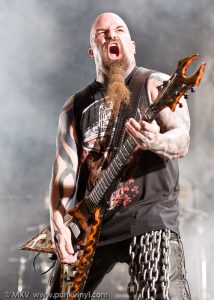 This Sunday, June 6, heavy metal fans from around the world will unite to celebrate the fourth International Day of Slayer (IDoS), and demand the official recognition of June 6 as a public holiday.  Those who observe the holiday are encouraged to stage “Slay-outs:”  “Listen to Slayer at full blast in your car, in your home, at your place of employment, and in any public place you prefer.”  Headphones are considered an offense to the movement.

When this crusade first launched four years ago on 06/06/06, it was in response to the American “National Day of Prayer,” which is held on the first Thursday of May.  Gaining momentum every year, the IDoS Board last year petitioned the White House for official recognition of the holiday, citing that “heavy metal music is the central belief of a culture that exists among us, and Slayer is the perfect spokesperson.”

During a recent interview with AOL’s NoiseCreep, Slayer’s Kerry King said about the IDoS, “I think it’s awesome, and it’s totally cool that fans have taken the time to maintain it.  Slayer should have a national holiday – there are enough stupid holidays out there, so why not have one for us?”

To lend support to the International Day of Slayer, log onto http://www.nationaldayofslayer.org/

In support of its latest album, World Painted Blood, Slayer – guitarists King and Jeff Hanneman, bassist/vocalist Tom Araya, and drummer Dave Lombardo – is currently on a massive European tour that includes several Sonisphere Festival dates where they will perform as part of the “heavy metal dream” Big Four – Metallica, Slayer, Megadeth, and Anthrax.  Slayer will return to North America in late July to co-headline (with Megadeth) the east coast Canadian Carnage tour, and then, starting August 11, the American Carnage tour.  Slayer’s entire summer tour schedule can be accessed at www.slayer.net