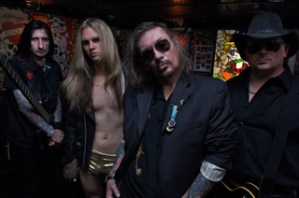 File this one under the “I didn’t know they were still around” category! Zodiac Mindwarp and the Love Reaction are not only still a band, but they have just signed to SPV/Steamhammer and have an album in the works slated for a September release.

The band started way back in 1985 and reached notoriety a couple of years later with their Tattooed Beat Messiah album which featured the song, “Prime Mover” which got fairly heavy rotation on MTV and rock radio at the time.  The band stuck out as being infinitely cooler and less feminine that all the hair metal (glam rock) that was flooding the mainstream and Zodiac Mindwarp became instantly appealing to people not into that scene, including myself who is a proud owner of the first two Zodiac Mindwarp albums.

The album, titled We Are Volsung, will feature ten songs and be released in September.