The Cure – Disintegration deluxe edition to be released Tuesday 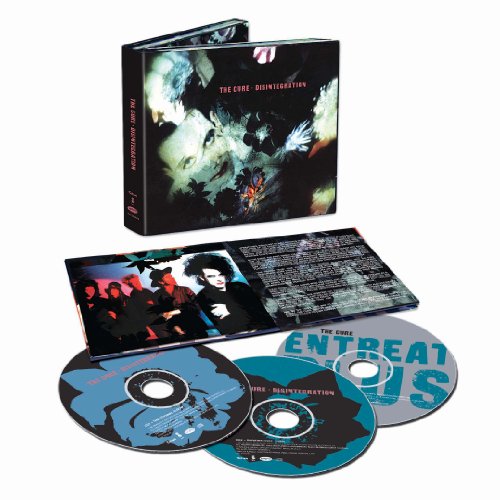 The Cure’s Disintegration album turns 21 this year which means it is now old enough to drink and it also means I’m getting really old! This masterpiece was originally released in 1989 and is easily their second best album bested only by Pornography and anyone who tells you otherwise is a liar! The memories I have attached to this album and my fondness for it would make for an entire chapter of a book suffice to say I hold Disintegration in the highest regard.

When The Cure started going back and remastering all their albums and releasing them as deluxe editions with tons of bonus tracks, I was eagerly awaiting this one’s turn and it is finally here a few years later. This deluxe edition looks to be worth the wait as it is a 3CD set, topping all previous deluxe editions by a full CD. The first disc is the fully remastered album which I’m sure will sound infinitely better than the original disc much like all the other remasters. The second disc features all kinds of demos and unreleased versions of songs from the album. The third disc features the live recording that was originally released as Entreat in limited quantities 20 years ago but adds a lot more tracks from the same show and apparently has been remixed and cleaned up as well. If the packaging follows the pattern of the previous installments there will be cool info and liner notes.

The album is also getting reissued on vinyl in the form of a 2x180gm LP which will also likely sound way better than the original single LP version released in 1989.

The CD version will be released this Tuesday while the LP version follows one week later. Hopefully they won’t wait another four or five years before they move on to Wish!