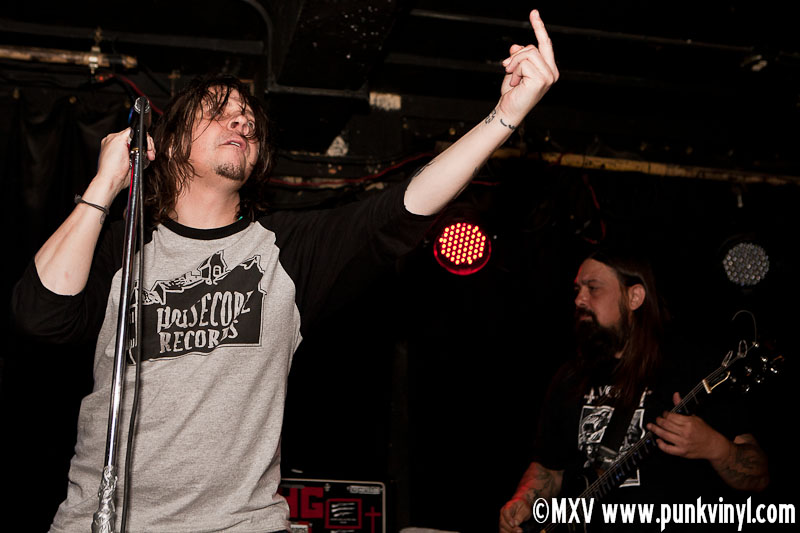 Last night Eyehategod ended their tour by playing the second of two nights here in Chicago at the Empty Bottle. They were joined this evening by a solid lineup of opening acts.

First up was Yakuza. They are a Chicago band and have been around for about a decade now. They took a doom metal/stoner rock foundation and added avant-garde elements to their sound including saxophone! Their songs had fairly complex structures too like they were the metal version of math rock. Definitely a unique band with a very interesting set.

One of Chicago’s best kept secrets, and a band that shouldn’t be a secret; The Atlas Moth, took the stage next. They were so heavy it was amazing the ceiling didn’t start collapsing. They had three guitarists (one that switches between that and keys), a bass player and a drummer who together form one of the most intense bands this city has ever seen. The main singer has an incredible shriek and yell and it is amazing his head doesn’t explode when he lets loose. They were so incredibly heavy, tight and amazing it was ridiculous. It is a pretty safe bet they left the club last night with a whole slew of additional fans.

Long-time Chicago metal veterans, Nachtmystium, made their return home from this tour to take the stage. They are like some sort of Black/Death metal hybrid with some psychedelic elements thrown in for good measure. They often play lightning fast heavy rifts with occasional elements of melody thrown on top of the machine gun blasts that form their songs’ foundation. They rarely stopped between songs and the energy level of the band was pretty impressive and this band keeps getting better and more of a well-oiled machine as time marches on.

After taking a lengthy amount of time to get their gear set up and tested, Eyehategod took the stage. Singer, Mike Williams, was already nine sheets to the wind when he stumbled on stage and started talking to the crowd and trying to duct tape them together as the band finished preparing. The rest of the band looked far less wasted and ready to play. Some of them were even smiling.

When the band finally started playing no amount of drunkenness could keep them from delivering the goods, in fact being that drunk seemed to help Mike sing those songs better and more accurately. How the man was able to remember the songs and sing them correctly while they played them but made little sense half the time when he talked between songs is one of the great wonders of the world. His between-song banter was fairly amusing though as the band played the entirety of their second album, Take As Needed For Pain. The band sounded heavier, thicker, and more sludgy than ever. These guys pretty much invented that style of metal and the decade they took off didn’t seem to have any effect on their ability to deliver the rock.

As the band played that album, the crowd went nuts up front pumping fists, banging heads and they even formed a mosh pit full of young kids who thought the idea of moshing was to play human bumper cars and randomly ram into people. Most of the people in that general area didn’t seem to mind and kept showing their appreciation for the band. Once the band got through all the songs on the album, they played a handful of other songs for good measure much to the delight of the audience who seemed to gain energy and move around more with each subsequent song.

The band played for at least 45 minute, though it may have been a full hour. It was a very satisfying and very heavy set and a light-hearted good time that was a great soundtrack for all the drinking happening in the bar. It was a great end to an extremely solid show and it was great to see Eyehategod again after so many years away. Hopefully this tour leads to the band staying active for a while and writing some new material!