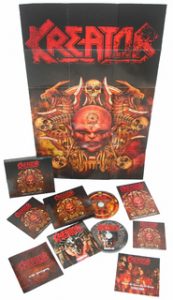 German thrash-metal legends, Kreator, are planning to release a deluxe edition of their most recent offering, Hordes of Chaos, later this summer. Hordes Of Chaos was recorded at Berlin’s Tritonus studios under the direction of producer Moses Schneider. The album was mixed in London by Colin Richardson (Slipknot, Bullet For My Valentine, Cradle Of Filth, etc.).

The new box set includes the Hordes Of Chaos album as a digipak with a new cover, a new booklet (including new liner notes by Joel McIver) and two enhanced videos. The bonus CD comes in a cardboard sleeve and contains 2 cover song, one from German band Slime and one from Bad Religion.   The bonus disc also includes five previously unreleased demo songs. On top of that the box set contains a high quality 12 page photo book by famous photographer Harald Hoffmann, a full colored poster of the album cover, a full colored photocard, a full colored sticker and a voucher for the Kreator  merchandise shop.

1. Hordes of Chaos ( A necrologue for the elite)
2. Warcurse
3. Escalation
4. Amok Run
5. Destroy what destroys you
6. Radical Resistance
7. Absolute Misanthropy
8. To the Afterborn
9. Corpses of Liberty
10. Demon Prince

11. Hordes Of Chaos
12. Destroy What Destroys You

The set will be released in North America on August 10, 2010