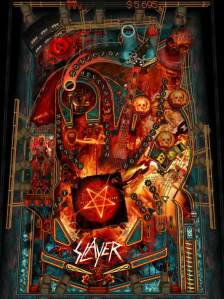 One of the greatest metal bands of all time, Slayer, have just release an app for the iPhone/iPad. Slayer:  Pinball Rocks, a new pinball game app developed in conjunction with American Recordings/Columbia Records, Sony Music Entertainment and Gameprom.

“As a life-size pinball player, this looks so awesome,” said Slayer’s Kerry King.  “It looks really fun and entertaining, with a shot of evil, and it could definitely keep me up all night with a few shots for myself…”

Slayer:  Pinball Rocks continues the rich legacy of iconic metal and rock bands making pinball tables, and for the first time extends that experience into the app world in a meaningful way, by offering fans an exciting and realistic gaming experience that immerses players in Slayer’s legendary sound and dynamic visual aesthetic.

Slayer:  Pinball Rocks appeals to both long-time and new Slayer fans, as well as any pinball enthusiast, by giving gamers multi-ball play and full tap-along mini-game, as well as exciting visual elements like spinning razor blades, guitars, amps, concert lights, and a skull that eats your ball and spits it out through its eyeball.  And of course, this is all accompanied by music that rocks courtesy of Slayer.

“We are excited to be premiering the Sony Music Pinball Rocks franchise with one of the great metal bands of all time,” says Matt Kozlov, Vice President, New Products and Services, Global Digital Business, Sony Music Entertainment.  “We think fans are going to love this exciting new way to live the Slayer experience.”

Slayer: Pinball Rocks is available worldwide for $2.99 from the App Store. The game will include original voiceovers from Slayer members as well as songs from Slayer’s latest American Recordings release, World Painted Blood. Slayer – guitarists Kerry King and Jeff Hanneman, bassist/vocalist Tom Araya, and drummer Dave Lombardo – is currently on a massive European tour that includes several Sonisphere Festival dates where they are performing as part of the “heavy metal dream” Big Four – Metallica, Slayer, Megadeth and Anthrax. Slayer will return to North America in late July to co-headline (with Megadeth) the east coast Canadian Carnage tour, and then, starting August 11, the American Carnage tour.  Slayer’s entire summer tour schedule can be accessed at http://www.slayer.net.