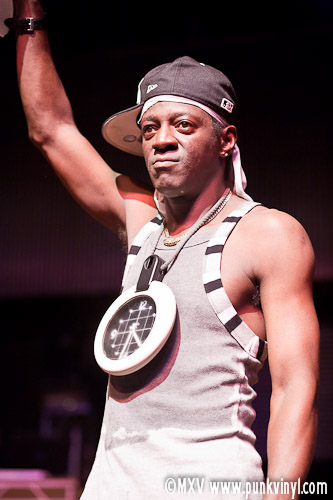 Last night Public Enemy made their long-awaited return to Chicago to play a show at the Congress Theater. It had been awhile since they last toured so they were long overdue! This historic rap/hip-hop band is now close to a quarter of a century old! The band, along with Run DMC, really opened the door for rap music to be accepted by the masses and Public Enemy’s music transcended all boundaries and the band found fans from many genres of music taking a liking to what they were doing.

First up was a 45 minute set by a lady DJ named Avi. She spun all kinds of records or mp3s or whatever gimmicks she had set up on her table. There was a variety of music played and it was something of a time machine of hits all weaved together. It was a pretty good background for relaxing before the musical acts started.

Local hip-hop act, BBU, quickly followed. They had three emcees and a DJ and were a very upbeat fun band. The three emcees stalked the stage back and forth and rarely stood still for a minute. Their songs were pretty dancey and catchy, especially their last number and they are an act well worth checking out.

After a lengthy sound check, Public Enemy took the stage to the delight of everyone in the audience. The band consisted of Chuck D, Flavor Flav, Professor Griff, two S1W’s, a guitar player, a drummer, and a DJ. Absent was Terminator X who apparently retired in 2003, in his place was DJ Lord.  DJ Lord got the beat started and the band opened up with “Contract on the World” and as Chuck D and Flavor Flav bounced all over the stage pacing back and forth, the S1W’s kept order by marching in place while Griff just looked menacing and occasionally contributed some backup vocals.  They immediately went into “Brothers Gonna Work it Out” and then Flavor Flav took charge with, “911 is a Joke”.

A couple of songs from Fear of a Black Planet later including an amazing rendition of “Welcome to the Terrordome,” and Chuck D started speaking to the crowd. He pointed out that this year is the 20th anniversary of Fear of a Black Planet which is a scary thing to think about as it sure doesn’t seem like it was that long ago! He pointed out that it was also the 21st anniversary of what many feel to be their best album (and certainly the one that got them noticed by everyone), It Takes a Nation of Millions to Hold Us Back. That fact is one scarier!

That led to a block of songs from that album! They tore through “Bring the Noise,” “Don’t Believe the Hype,” Show ‘Em Whatca Got,” and they even did “Terminator X to the Edge of Panic” with of course DJ Lord playing the part of Terminator X and doing a stellar job.

The entire set really was like a greatest hits package on stage. They played nearly every song you’d want to hear, unless you wanted to hear something from the very first album, Yo Bum Rush the Show as that album was totally ignored unfortunately. That aside, you couldn’t ask for much more of a solid set list. They made all kinds of embellishments to the songs and changed them up in many cases including doing a rendition of “By the Time I Get to Arizona” over the music to “Ball of Confusion”.

Chuck D spoke a lot between songs about important world issues such as the BP fiasco, the state of politics and the economy, and also the need for our country and world to be unified. These were all important topics that he spoke about very intelligently in an effort to make the crowd think, and hopefully act.  Chuck also spoke at length about the history of hip-hop and music in general, and also the history of Public Enemy and all the places they’ve played in Chicago over the years. He’s really a captivating speaker as much as a rapper, and no one got bored of hearing him speak. Flavor Flav also spoke on a couple of topics too but mostly stuck to his usual role of getting the crowd amped up with as the entertaining sidekick to the much more serious Chuck D. It’s a great dynamic that still works as well now as it did 20 years ago.

At one point in the show, the band stopped for an impromptu gymnastics competition between Flavor’s nephew and one of the S1W’s cousins! They flipped all over the stage while Flavor sat down at the drum kit and pounded out a pretty great beat which DJ Lord added his seasoning to. Those guys could really flip too, it was really impressive!

The band then got back to business as they headed towards the home stretch of their set which included “Shut “em Down,” “Fight the Power,” and they ended on their most powerful note, “She Watch Channel Zero” which was so heavy that the structure of the Congress Theater was probably compromised. When the band was done playing, two full hours had elapsed without them so much as taking a break and as the band left the stage and said their thank yous to the crowd, Flavor Flav spent a good five minutes preaching to the crowd about how we need unity among people of all races and backgrounds and also thanked the crowd for making his reality show the most popular one in history. Ah Flavor Flav, ever the comedian!

Public Enemy proved this evening that while they may not fit in with the drivel that passes for rap and hip-hop these days, they are every bit as relevant and entertaining now as they were twenty-plus years ago, and that time has been most kind to them. Here’s hoping for a speedy return through town as this was easily one of the most entertaining shows of the year and everyone got more than their money’s worth out of the price of their ticket.

Check out some additional photos from the show here.