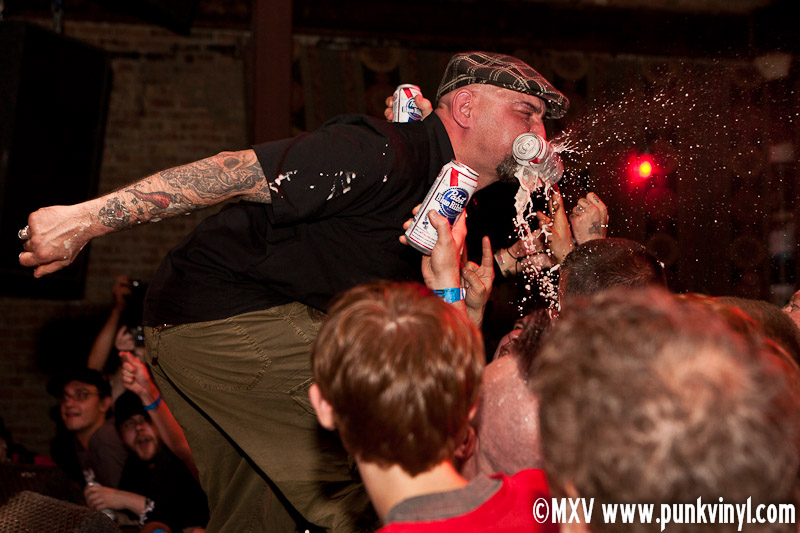 Last night Reggie’s hosted a big “old man punk” show with four legendary punk rock bands from the old days playing together at the same show (just like they did it back in the day!) along with some local acts. It was a seven band marathon that lasted longer than a full work day.

First up was a Chicago band that has been around since the 1980s and one that probably no one knew was still around, Dead Steel Mill! The full original lineup dusted off their instruments and themselves to get things started. They played some classic hardcore punk and a couple of slower punk numbers too. Their lead singer was pretty entertaining and talked a lot between songs. It was pretty amazing that they dug this band up for the show and a nice treat for those smart enough to show up early.

The Non-Believers were the next to take the stage. They just played Reggie’s about a month ago opening for MDC. They played 70’s inspired sing-along punk that was highly derivative but inoffensive. They played a half-hour set that was pretty tight though many of their songs sounded alike. They lost about 100 points for their Screeching Weasel cover, one they didn’t even acknowledge as not being one of their own songs.

Audio Violence were third. They were a pretty straight-forward hardcore band that played a short but enjoyable set. They were missing their bass player due to a family emergency and decided to do the best they could without them. Until they soiled the Misfits, “We Are 138” at the end of their set, they were doing quite well despite the missing member. If you pretended that last song didn’t happen or went out for a smoke at that time, then you’d probably have thought the band were really good.

Chicago’s own Juicehead were next. They had a Ramones meets OC punk sound. Their singer had a sort of raspy vocal sound which was pretty interesting and fit their punchy sound nicely. The large crowd in the club at this point seemed to really appreciate them too as there was a lot of dancing going on through most of their set. Their half-hour set flew by very quickly and they were a fun band.

This concluded the Chicago portion of the show and now it was time for the “big four” to start. Agent Orange took the stage to a packed house eager with anticipation. They started getting excited the minute Mike Palm started setting up his gear on stage. They opened up with some instrumental track that was kind of surfy and the crowd already started going nuts. By the time they started playing some older songs from the Living in Darkness album, almost the entire main floor was one giant mosh pit! The band blasted through pretty much that entire album plus some covers and newer tracks. They ended the set with a double-whammy of “Bloodstains” and a cover of “Pipeline” that was second only to JFA’s version of that in its greatness. A solid 45 minute set that was great from start to finish and Mike Palm seemed to be really enjoying himself on stage as he was all smiles and had a good attitude the entire set.

Orange County punk legends, D.I. were next. Casey Royer immediately started entertaining the crowd with his witty stage banter and humor while the rest of the band finished setting up the gear. Once they got going the crowd got even more alive than they were for Agent Orange which was hard to top! They played some new songs and lots of classics like “Richard Hung Himself,” “Guns”, “OC Life” and others. They also did a piss-take on “At the Hop” but their version was “Let’s all Smoke Some Pot”. The crowd went most crazy for their rendition of “Amoeba” which Casey wrote when he was in the Adolescents. They played about 45 minutes and it was a hell of a lot of fun for the entire crowd.

New Yorkers, Murphy’s Law didn’t waste a lot of time setting up and got right down to business. Their business consisted of a great set full of classics from their first two albums. The classics included “Beer,” “Quest for Herb”, “Cavity Creeps,” “California Pipeline” and even a cover of Minor Threat’s, “Straight Edge”. Singer Jimmy Gestapo was swigging from a huge bottle of Jägermeister and shared it with the crowd. Nearly the entire row took a swig from that liquor filled petri dish! In between songs Jimmy talked a lot to the audience and the set was like one big party. The band tossed free beers out into the crowd and the crowd threw beers all over the place.

Youth Brigade finally took the stage next and it appeared the band had spent a great deal of the show drinking as they were pretty well lit-up and made it no secret as Shawn Stern announced it to the crowd. The inebriation only made the band more fun though and they talked a lot more between songs. Drunkenness didn’t have any effect on their ability to play their songs with precision though as they belted out a lot of classics and some newer songs to the delight of the full house. They even played “Men in Blue,” which they haven’t done the last couple times they came through town! They played about 45 minutes as well and then had to wrap it up by closing their set with “Sink with California” where about half the crowd hopped up on stage to sing along with. It was a fun way to end a really fun show with a solid lineup of bands!