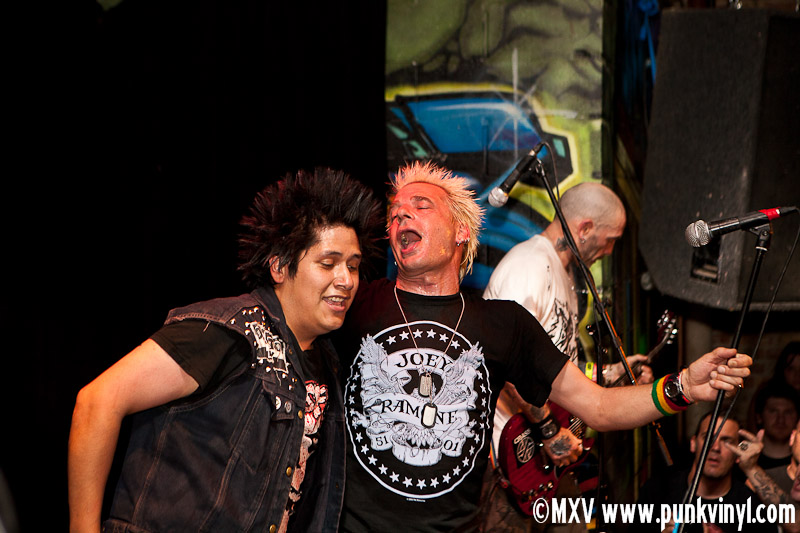 Reggie’s has been batting 1000 lately in terms of killer shows, especially of the old punk variety, and Friday night was no exception. GBH, perhaps the longest running UK punk band (without a break up) returned to the South Loop in support of their new album and headlined a four-band all ages show.

Long-time Chicago party punks, Johnny Vomit, started the show off. They are kind of like the abandoned child of The Mentors and Murphy’s Law. They played slightly sloppy hardcore and their songs were about partying, fucking, chicks, etc. They were good light-hearted fun and delivered a half-hour good time.

Another Chicago area band that has been around for a few years, The Infected, played second. They played metal-laced hardcore by the numbers. The musicians played a tight set and the singer growled his head off. Not much has changed about them in the past few years and some of the crowd seemed to be into it as a pit would occasionally form.

New York City’s Outernational played third. They billed themselves as a revolutionary rock band and they seemed heavily influenced by The Clash. They mixed punk with reggae and ska to create some really upbeat and catchy tunes with soul. Though quite derivative of the Clash, after a couple of songs they really won over a good chunk of the crowd who started dancing instead of moshing and slamming. They also did a really good cover of “Electric Avenue” by Eddie Grant and put their own spin on it which made it really fun.

By this time the club was packed full and you could feel energy in the air. This was going to be a wild crowd. The crowd started chanting for GBH as the band was still setting up their equipment and by the time they took the stage the crowd was ready to explode. Explode is exactly what the crowd did by the time the second note rang out during GBH’s first song.  The entire main floor was a sea of flying bodies bouncing about and climbing on each other.

The band played a bunch of old favorites and sprinkled some new songs in from their new album, Perfume and Piss. The new songs sure sounded a lot like classic GBH songs and the crowd treated them as such by never stopping moving or climbing on stage. There was a non-stop stream of kids climbing on stage and trying to sing along, or just shake a band member’s hand or hug Colin before jumping off the stage. The security guards couldn’t keep up with the madness and were relegated to just making sure no one was getting hurt and it seemed that no one was and that everyone was having a lot of fun.

All the energy in the crowd seemed to really fuel the band too because they played a very long set and never slowed down or showed any signs of getting tired. It was one of the tightest GBH performances in years and felt as if the band sucked the youthful energy from the crowd in order to channel their younger selves and put on a five-star performance. The band closed their set with a cover of the Clash’s, “White Riot” which the singer from Outernational joined them on and then called it a night. A full house of sweaty and mostly young punk all left exhausted and happy having been part of one of the most fun nights of classic punk this summer.