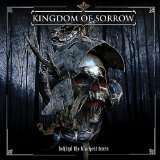 Kingdom of Sorrow – Behind the Blackest Tears 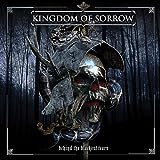 Kingdom of Sorrow – Behind the Blackest Tears
Relapse Records

Kingdom of Sorrow is the side project of Kirk Windstein (Down/Crowbar) and Jamey Jasta (Hatebreed). The pair formed the band a few years ago and this is their second release, one that took them the better part of two years to put together.

The band’s music features deep sludgy riffs that are heavy on the low-end.  It’s impossible to not compare them to Windstein’s other bands as they bare a noticeable resemblance to both Crowbar and to a lesser degree, Down. The man has made a science out of getting his guitar to make those kinds of riffs dating back to long before it became cool to do so.  The music is mostly mid-tempo with songs averaging four minutes each.  The vocals are exactly what you’d expect from the frontman of Hatebreed, which is yelling and growling, however here it is done with more variety. He also gets more melodic and harmonious with his singing without losing the raspy edge even in the mellower parts of the songs. Jasta’s vocal style on Behind the Blackest Tears often times is reminiscent of Phil Anselmo of Pantera in a lower pitch.

The album contains 12 songs which flow nicely together. Most of the songs have a similar sound to them so if any one song is to your liking, chances are most of the album will be. I thought the real standout was “From Heroes to Dust,” which is almost like a ballad as it’s slower and more musical than most of the songs on here, but not to the point of being at all wimpy plus it contained its share of the heavy in portions too. The album is a solid piece of work and fans of the members’ other bands will find a lot to like in Kingdom of Sorrow.

Order the album from amazon

Kingdom of Sorrow on myspace

Kingdom of Sorrow – Behind the Blackest Tears