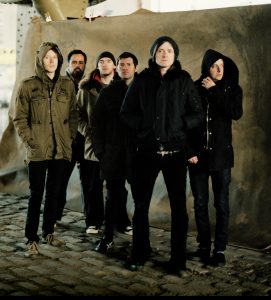 New Jersey’s Thursday have entered the studio to record their sixth studio album and follow-up to 2009’s critically acclaimed release, Common Existence. The band will spend the next few months recording at Tarbox Road Studios in Fredonia, NY with Common Existence and A City by the Light Divided producer Dave Fridmann (MGMT, The Flaming Lips, Mogwai) and plan to release the new album in spring 2011 on Epitaph Records.

“We’ve worked with Dave Fridmann before, but this is definitely the most we’ve ever clicked with him,” says singer Geoff Rickly.  “In style, this record feels like a radical departure from our earlier records but in substance it feels like a return.  The songs are more vulnerable than they’ve been in a long time.  Some of the song titles include “A Darker Forest” and “Little Sparks Against the Sun”… It’s very atmospheric and mood oriented so far.”

In other Thursday related news, singer Geoff Rickly recently re-activated his acclaimed side project United Nations along with members from GlassJaw and Converge to release a 7″ vinyl called Nevermind The Bombings, Here’s Your Six Figures via Deathwish.  He will also be singing with groundbreaking punk band Ink & Dagger this summer for a benefit show, “This Is Hardcore,” for the Maks & Zielanski family.