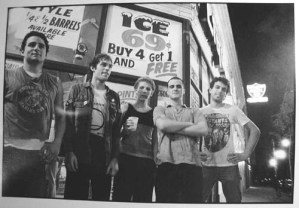 This just gave me a reason to keep living, Chicago hardcore legends, Articles of Faith, have returned! For the first time in 25 years, the band will reform (with all original members) to record an EP at Chicago’s Million Yen Studios for release on Alternative Tentacles on October 5th. It will be available digitally and on vinyl. Not content merely to record, they’ll celebrate the new release with their first live show in 25 years, at Riot Fest in Chicago the week of October 6th-10th. The band will be doing a photo shoot during the recording sessions (July 2-6) to replicate their iconic photo in front of 1000 Liquors on Belmont Avenue from the 80s, at the same location to document the reunion after all these years.

Articles of Faith dominated the Chicago punk scene from 1981 to 1985, stunning the scene with a triple guitar attack and a diverse sound that drew from funk, reggae and jazz, featuring lyrics about finding fulfillment in a consumerist, mass consumption-focused society. Their protest songs were lyrically a cut above, raising the bar with coherence and passion while mirroring the Dischord scene.  In four short years they left an indelible mark on punk and hardcore, paving the way for the vibrant Chicago music scene for years to come.

In the few years that Articles of Faith were together, they released a pair of 7″ EPs (What We Want is Free and Wait) and a pair of LPs (Give Thanks and In This Life), appeared on a couple of compilations (the best of which was The Master Tape),  and toured North America many times from 1983-1985.