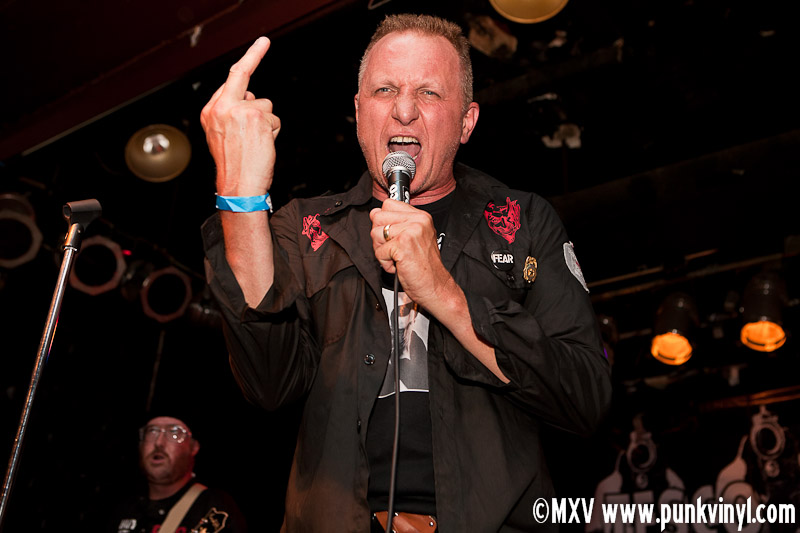 Saturday night was classic punk night as the Abbey Pub hosted a couple of punk rock legends who were in town for the day. Those legends are Tesco Vee and White Flag. They were part of a four band bill on a night that saw Chicago having a lot of shows going on around the city.

An old MI punk band, Fester, recently reunited and opened this show. They apparently formed around 1980 but have been inactive for the past couple decades. They were sloppy old-school punk (you almost could call them drunk-punk) that was rather harmless but came off as amateurish. They also wasted part of their set by doing some covers including a Black Flag cover. If you are going to go through the trouble of learning an old song that you can’t do justice to, at least learn the lyrics! Their original material was fairly harmless and light-hearted fun but those who showed up late didn’t really miss anything special.

Chicago’s own Das Kapital played second. They are led by Marc Ruvolo of No Empathy fame and much like that bad, Das Kapital is a solid melodic hardcore type band. Their songs are fast and punchy but also melodic and hooky. Marc has a great voice for this style of music too and even though he claimed to be having a sore throat, it didn’t tarnish their performance one bit. They played a tight half-hour set that was well worth coming early for.

It may have only taken 28 years, but White Flag finally came to play here in Chicago! In their lengthy career they seemed to have played exclusively in California, and every other country known to man except the rest of the United States. It was a long time coming and it really looked like the only way one could ever see the band was to live in CA or go to places like Spain or Sweden. Before the band started playing they showed a video that gave a really brief history of the band and then the screen came up and the band started playing.

They opened with what is easily their best song from the hardcore era of their lengthy career, “Shattered Badge”. It sounded great even though they didn’t re-create the cop/punker vocal exchange the middle of the song. The band was super energetic and played like they were still in their 20’s. They played a really good selection of songs spanning the first half of their career including “Celebate,” “White Flag,”, “Instant Breakfast,” “Hot Rails to Hell”, and tons more. In fact had they played “Suicide King” it would have been an absolutely perfect set for any long-time fan. The dynamic of the three guys up front sharing vocal duties really works great in the live setting and their songs are so catchy that it is amazing they aren’t way more popular than they have been in this country. They were absolutely worth the lifetime of waiting for them to play here.

White Flag raised the bar very high so Tesco Vee’s Hate Police had the pressure on them to deliver as good of a set as what preceded them. The band came out dressed in black jumpsuits with their names on the front. Their black prisoner attire was a bit of an homage to Crime, right down to having Crime logos on them! It was a good look for the band and every member of the Hate Police was a very animated showman. Tesco came on stage sporting a big air rifle that shot confetti and the band tore into “We’re the Motherfuckin’ Hate Police” and immediately started stalking the stage as he belted out his trademark bellows.

The band was non-stop energy and played with a surgeon’s precision as Tesco, ever the commanding front-man entertained the crowd as he delivered a great vocal performance. In between songs he would entertain the crowd with various stories and jokes and his great toilet sense of humor hasn’t grown stale at all in the past three decades. He had the crowd thoroughly entertained.

After a few Hate Police numbers the band shifted gears and did a few Meatmen songs which delighted the crowd in a huge way. They did “Dumping Ground,” and “Tooling for Anus” which sounded so good it was awe-inspiring. There was a few die-hard Meatmen fans in the crowd that went absolutely nuts during these songs and were jumping up and down so high it looked like they were on pogo sticks. The band then played the best song from Tesco’s Dutch Hercules record, “Lesbian Death Dirge”.

From there it was back to some Hate Police classics and then once again back to some Meatmen tunes. They did “I Club Baby Seals”, “Gang Rape Lullaby,” and then on to the entire “Suck” trilogy (Crippled Children, French People, Camel Jockeys) in order including headgear costume changes between versions by Tesco. “One Down Three to Go” was updated to be two and two since the passing of George Harrison made the original title obsolete.  The band’s delivery of every song was priceless and Tesco is one of the most entertaining front-men in all of punk rock. It was impossible to not enjoy their set this evening, it was non-stop fun.

As they concluded their final block of great songs, the band started stripping out of their jumpsuits and Tesco said they had a special surprise for everyone. He made some historical small talk and then announced “Ladies and Gentlemen for the first time in 30 years, The Fix!”. Steve Miller, singer of The Fix came out on stage and the band proceeded to play a handful of Fix tunes in rapid fire order. There was no stopping between songs, it went from one Fix classic to the next with such incredible energy that words alone can’t describe the intensity. Steve sounded like his old self and delivered a flawless vocal performance that sounded just like the old records, but even more powerful. It was amazing and one of those rare “Holy Shit” moments that come along so rarely.

As if that wasn’t enough, Tesco came back on stage for one final song to end the evening and put the finishing touches on one incredibly fun show, one that if you missed out on you should be kicking yourself for.