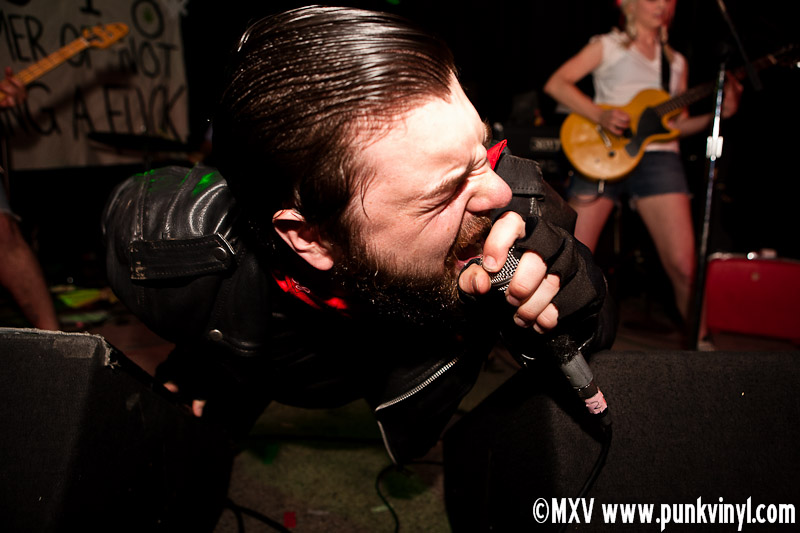 Monday night for the low price of free, music fans who felt like venturing out on a school night were treated to some fine music at the Empty Bottle. It was a four band bill, however I missed the first one so I can’t report on who they were or what they sounded like.

The Muzzler took the stage soon after my arrival. They are a super heavy metal hardcore blend with a really thick sound. Most of their songs were fairly quick tempo and powerful with a singer with shrill vocals that are pretty brutal. These guys have gotten even heavier and tighter than the last time I saw them at the beginning of the year and they put on a great half-hour set.

After a speedy setup, Chicago Thrash Ensemble took the stage. They play rather speedy metallic thrash. Their songs are fairly short and powerful. Their singer never holds still for a minute and flailed about as he shrieked out his vocal parts. They played pretty much their entire 12″ EP and it sounded damn good in the live setting and more intense. They were well worth the trip to the city.

Loose Dudes finished the evening with a set of garagey lo-fi punk rock and roll. They were loud and raw and they came out on stage dressed as the Village People which would have been a funny gimmick had Tutu and the Pirates not done the same thing but better a couple of months ago on that very stage. The band has a female guitarist who on top of being a solid player was totally adorable. The singer was a bit on the drunk side and he flailed about like a beached whale, including falling off the stage a few times and singing on the floor where he landed.

Overall it was a pretty solid show and well worth the trip to the Bottle, especially considering no one had to pay. Those that came out were treated to an entertaining evening.