Autopsy to release a new EP in September 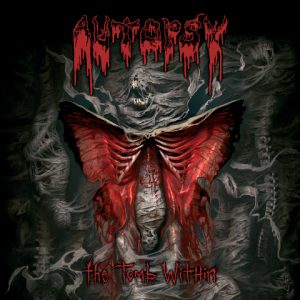 Here’s a blast from the past, gore metal band, Autopsy, have completed the recording of their first tracks since officially reforming last year.  The Tomb Within EP was recorded in mid-July 2010 at Fantasy Studios with Adam Munoz.  ‘The Tomb Within’ unites the original trio of Chris Reifert, Danny Coralles, and Eric Cutler, joined on bass by Joe Trevisano (ex-Abscess).

The new EP – the band’s first in over a decade – consists of five new tunes and will be released on CD and 12” vinyl on September 13th through the Peaceville Records webstore, with a general release set for later this fall.  Cover art is supplied by renowned fantasy/horror artist Matt Cavotta.

Autopsy decided to make an official comeback after working together on two songs for the special 20th anniversary edition of their debut album, Severed Survival, in late 2008.  The band had originally decided to split before the release of their fourth album, Shitfun, in 1995.

The 12” vinyl edition of ‘The Tomb Within’ comes with a free poster of the stunning cover artwork, and is limited to just 1000 numbered copies. Autopsy issued the following statement about their reformation and the forthcoming EP:

“As many of you know, for years it has been repeatedly stated that Autopsy was over with and done for good. While that was indeed true for a long span of time, it is no longer the case. Autopsy has come to the solid realization that the time is now right to resume their mission of gore soaked death metal brutality and to fulfill this mission with maximum intensity. Make no mistake about it, Autopsy is not about reliving the past, basking in nostalgia or riding on efforts from years long gone. The band is hungry to devour fresh minds and souls and has been amassing an arsenal of new and deathly material to unleash upon those who also hunger for such brutality. The surgical instruments are being sharpened and a pure death metal assault of the most horrific order is underway as you read these very words. On behalf of the band, thanks goes out to all who relented and simply would not allow this beast to remain in the grave. Your persistence will be met with unspeakable and unapologetic sonic atrocities. Let the blood flow….”

Autopsy will be hitting the European shores in August with two special and exclusive headlining shows at Partysan Open Air festival and Norway’s Hole in the Sky festival.