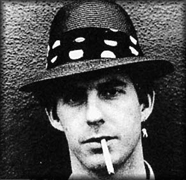 Derf Scratch, original bassist of the punk band Fear, passed away last week due to an unknown illness. Derf, born Fred Milner III, was one of the founding members of the band and played on their first two 7″s and first LP, The Record, which is one of the finest punk rock albums of its time. Fear was also notorious for their appearance on Saturday Night Live which happened at the insistence of John Belushi who was a friend to the band and a huge fan.

After leaving the band (by allegedly being fired by front man Lee Ving), I’m not sure what ever became of Derf.  Lee Ving continues to play under the name Fear from time to time with a variety of hired hands as his back-up band. Rhino Records reissued The Record on vinyl a couple of years ago.