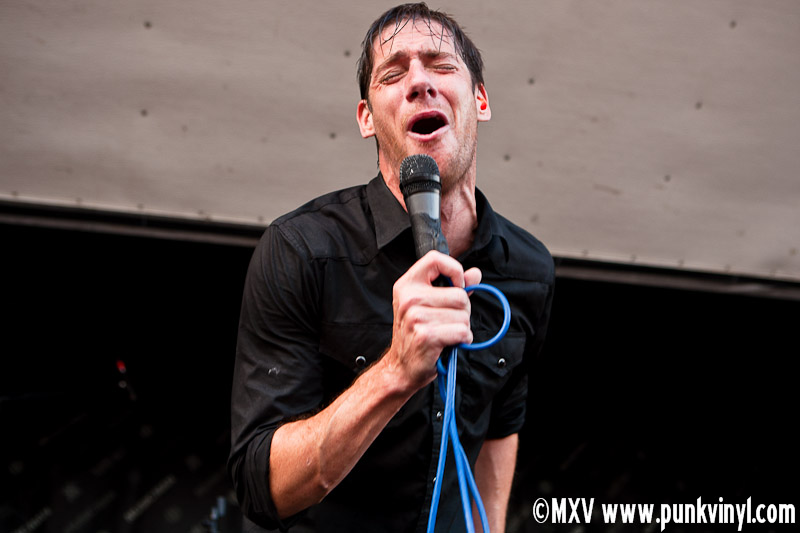 The afternoon was passing rapidly and there were a couple of contenders for the best band of the day, but after the next band played it was clear who the winner would be.

Whitechapel won the prize for best of show. These guys play some of the heaviest and most brutal death metal around. They have three guitarists and the sheer force coming out of the speakers was so powerful it could knock a person down. They were so heavy it was sick and it was weird having them be part of Warped Tour when they could have stolen the show the night before at the Rockstar Mayhem Fest. They need to come back and tour again on their own and if you are going to a Warped Tour show do not miss these guys!

Riverboat Gamblers had the unfortunate situation of playing one of the smallest stages and as a result not as many people saw them as they should have. These guys were so energetic it was infectious and they had a really good sound to them. Their southern twanged punk rock was a lot of fast toe-tapping fun and at one point the singer climbed up the speaker stack at was as high as the top of the stage structure. They are playing Riot Fest this year too and are an act that is a must-see on this Warped Tour.

The Rocket Summer played what should be known as CW-pop. Really light music for young kids that would be a hit at the school dance. Another situation where they had a majority of the younger kids and girls watching them and loving every minute of it.

Four Year Strong were a band that took hardcore and made it way more melodic which resulted in a sort of really heavy and punchy rock band. They were somewhat catchy and put on an enthusiastic performance that pleased a good-sized group of rabid fans who were crowd surfing like crazy. They were like sportscore and had an athletic theme to them right down to having people waving banners with their band name on them.

We the Kings must have been the premier CW-pop band on the tour because the crowd they drew at the stage they played on was huge. They were also one of the final performances of the evening as the sun was going down. Two of the members played barefoot and stood on a carpet. Their songs were very poppy, very radio and family friendly.

And that concluded another Warped Tour, which sadly means that summer is almost over. It was a pretty diverse show that may have been a bit too heavy on the pop bands and way too light on veteran punk bands, but overall there was a little something for nearly everyone and once again those who bought tickets certainly couldn’t complain about not getting their money’s worth as there was so much to see and do.