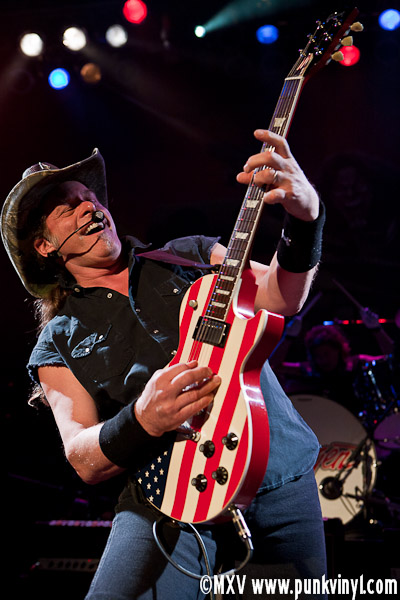 Summer means two things: it’s skateboarding season in the midwest and Ted Nugent puts down his bow and arrow and picks up his guitar and hits the road for a season of touring. The controversial motor city madman has enjoyed a musical career spanning nearly four decades now and shows no signs of letting up. He made his return to Chicago at the House of Blues on Wednesday night.

Canadian rocker, Val Halla, opened the show. She informed the crowd early on that her band had up and quit on her mid-tour but she managed to find suitable replacements on short notice, who learned her songs on even shorter notice. Had she not fessed up to this, no one would have been the wiser as they played just fine . She played some dirty blues-inspired rock and roll. She had a pretty good voice for the style of music and played a pretty short but entertaining set that the crowd of old rock fans seemed to enjoy.

When the first guitar notes of Ted Nugent came through the PA, the packed house roared and screamed with approval. The curtains opened and Ted and his band did a rendition of the Star Spangled Banner which was pretty lengthy and full of guitar noodling. Ted was sporting an American flag guitar that he’d use for most of his set and was screaming and getting the crowd worked up. He was sporting a cowboy hat which stayed glued to his head the entire show and had a wireless headset microphone which left him free to prance around the stage at will, which he did like a proud peacock.

When the six-string tribute to our nation was complete, the band went right into, “Stormtroopin,” and an extended version of “Wango Tango,” which led straight into “Free For All” which was a pretty solid start to a show. At this point Ted slowed the pace down by talking a lot between songs about various topics including years of touring, hunting, the president (it was Obama’s birthday that day and he is from Chicago), and he also liked to refer to every song he played as “another love song”.

Ted is a very opinionated guy, and made his opinions clear on many political subjects and took many jabs at Chicago for its history of elected officials who found themselves on the wrong side of the law. At one point it almost seemed like he was trying to get heel heat by insulting the city so much but the fans didn’t bite, the only thing close to heel heat he got was when he spent nearly ten minutes talking at which point some inebriated fans in the audience started yelling for him to shut up and play another song. Most of the rest of the crowd seemed fairly entertained by Ted’s diatribes as he threw handfuls of guitar picks into the audience.

When he did get back to business he played a solid set of rock songs including, “Love Grenade,” “Wang Dang Sweet Poontang,” “Rawdogs Warhogs,” and even a pretty cool rendition of “Soul Man,” which he said was an appropriate song to play at House of Blues in Chicago since Chicago was the home to the Blues Brothers.

Ted concluded his set with the one-two punch of “Cat Scratch Fever,” and “Stranglehold,” which not only sounded great but got the biggest applause of the night. He left the stage and came back a few minutes later with a new guitar and was sporting a full Native American headdress and ended the show with “Great White Buffalo”. He played for about an hour and a half, but if you subtract the talking it was probably more like 70 minutes. The crowd seemed happy, the band played those songs great and overall Uncle Ted put on a pretty entertaining rock show and showed that his old age hasn’t hindered his guitar playing ability one bit, nor softened his stance on anything. The mostly inebriated crowd seemed pleased as they filed out of the venue to head home.