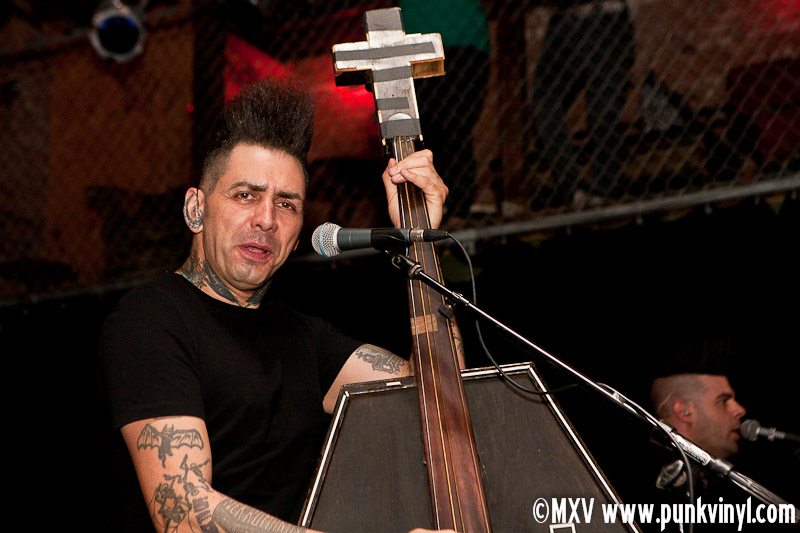 While half the city was a few miles north for Lollapalloza, Reggies packed their own house with a bill full of psychobilly bands that drew a huge crowd. The Nekromantix made their long-awaited return to the Windy City headlining an all ages show at the South Loops finest venue.

Chicago psychobilly band, The Massacres, opened the show. They were your typical type of band for this genre. They had some catchy songs and were a bit more on the melodic side of the scale but they seemed to lack excitement which just left their set sounding a bit flat. They weren’t bad, but just not very exciting.

The second band, The Howlers, were on the opposite end of the spectrum. Their style of psychobilly was a lot more energetic and exciting and they had a bit of a Misfits influence to them especially in the vocals (and as evidenced by half the band wearing Misfits shirts). They really got the crowd going too and of the three opening bands, they were easily the best. Their set was fun from start to finish.

The Mutilators took the stage next. They were painted up like butcher doctors covered in blood. Their singer/guitar player also was dressed as a bloody nurse and was like the doppelgänger of Gary Floyd. He stayed in character the first half of their set and talked a lot and showed his over-sized ass to the crowd. They were somewhat amusing and a tad bit disturbing, which kind of masks the fact that they were upstaged by the band that came before them. They also wasted part of their set doing a couple of covers. Props for the cool looking blood soaked attire and instruments!

The club was completely packed by the time Nekromantix took the stage. They came out to a big roar of the crowd and immediately started playing. This three-piece band is a cut above all the other bands of this genre. They are fast, frantic, and energetic and they have such catchy songs that you can’t help but start tapping your feet or dancing along to their songs. Nekroman’s coffin-shaped standup bass is perhaps the single coolest instrument in music and he’s an excellent and charismatic frontman. The rest of the band rank up there too and all of them including the drummer were pretty good showmen/showwoman. They played about an hour and the crowd ate up every second of it with a lot of them dancing and even some singing along.

Those who passed up Lollapalloza and decided to head over to Reggies enjoyed an action-packed show and those of you who skipped out missed out on a really solid show.

Check out a few additional photos from this show here.

Friday night was a special night in Oakland, CA as The Uptown hosted MoFo’s 60th birthday party and it was a skate rock extravaganza! Drunk Injuns and JFA played together in honor of MoFo, and they were joined by...

Wednesday night, UK punk legends, The Adicts, made their long-awaited return to the windy city to headline a three band bill. The club was packed full of excited punk fans spanning a wide range of ages. First up was...

Last night in the downstairs room of Subterranean, Street Sects headlined a three band bill. The band has been touring quite a bit recently and after returning from Europe, they hit the road one more time to get some...