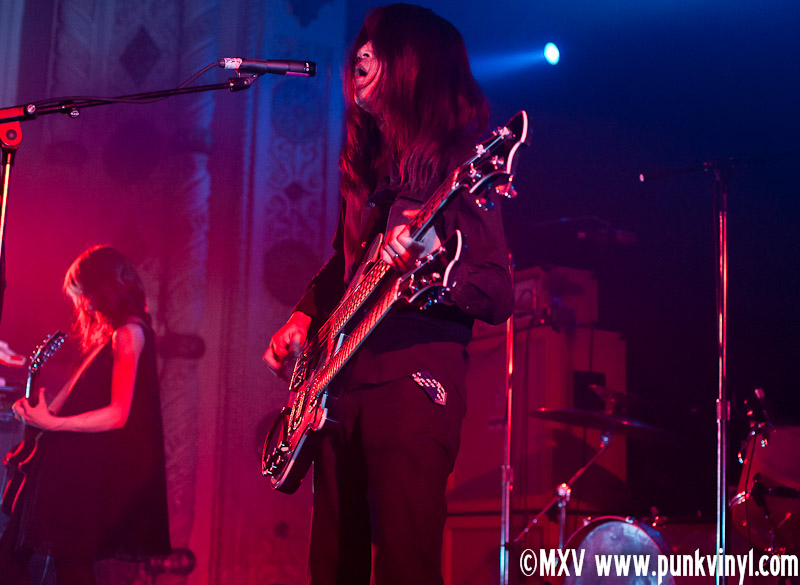 Friday the 13th was only unlucky if you were a photographer hoping for the barricade to be in front of the stage of the Metro and for them to turn on more than one light bulb on stage. For everyone else who came to Wrigleyville (home of the incorrect Chicago baseball team) for the Boris show at Metro, they had the luck to be treated to a trio of stellar bands sharing the stage of one of Chicago’s longest running music venues.

The Life and Times got things started with a half hour set of some fine, hard-edged indie rock. Anyone familiar with Shiner (one of the most under-rated bands of the 1990s) is probably familiar with this band as main songwriter/singer/guitarist Allen Epley started this band sometime after Shiner broke up.  This band sort of takes up where Shiner left off with that unique space-rock inspired angular guitar sound but The Life and Times expands that sound with more diversity and experimentation. They write some crafty songs that are powerful yet melodic and aside from the mix being a bit weird for their set, they really put on a great set that was over too quickly.

The Life and Times

Chicago instrumental heavyweights, Russian Circles, took the stage under 3 small light bulbs shining behind each member. It is amazing how this three-piece band makes such a huge sound as if they had ten people on stage. They opened with “Harper Lewis” which is easily their best song, and probably will be forever. Each member plays their instruments like no one you have ever seen before and it is a sight to behold. Their drummer hits his drums so hard that you swear he is going to go thru the drum and hit the floor, yet he does so with the precision and accuracy of a surgeon. You could spend an entire set watching him play and just be amazed at how good this guy is at his craft and how tricky and intricate his drumming is. Their guitar player is no slouch either as with a single guitar and about 1100 pedals and gimmicks attached to it, he makes a sound bigger than a band with three guitarists. He never switches guitars either, he just keeps re-tuning his guitar between every song, or sometimes during breaks in songs! The bass player is equally amazing, keeping up with the drummer and laying a thick bed of sound as the foundation for the guitars to layer on top of. Breathtaking is about the best way to describe their set that featured songs from each record. They damn near stole the show.

The place suddenly got a lot more full when Boris started setting up their gear. They had a big gong set up behind the drum kit and one of the two guitarists had such a complex setup of pedals and attachments to his guitar rig that you would need to be an electrical engineer to decipher it all. Boris have such a unique sound that is an amalgam of so many styles of music that it is near impossible to accurately describe them. You also don’t know what you are going to get from them because of the variety of songs they are capable of.

The stage filled with smoke (and would continue to do so the entire night) and they started off a bit on the mellow side with “Farewell” and then immediately played “Rainbow”. The sound was crystal clear though the vocals were kind of buried in the mix, but that may have been by design. After the first two songs they kicked into a higher gear and started playing some faster and heavier songs. Once they start opening up and letting loose with those guitars, the best way to describe them is sonically intimidating. They have this amazingly loud guitar sound like no other, yet somehow turn all that noise into melody in a way that works much like the shoegaze bands of the early 1990s did, but far more impressive and larger than life.

The band never talked between songs and they barely even stopped between them aside from doing some quick tuning of guitars. They simply walked out on stage and proceeded to put on an amazing set and then leave. When they played the faster numbers the crowd were way into it, and when they played the really mellow ones the crowd at times seemed to grow a bit tired. The way the set was paced was like a roller coaster with a lot of ups and downs and it made for a pretty diverse ride from start to finish. They played for 90 minutes and ended with a big noisy climax where everyone went to town on their various guitars while the drummer beat the shit out of his gong and then jumped out in the crowd to crowd surf. It was an incredibly impressive show and one that you must see if they come to your town.

A few additional photos from this show are available here.