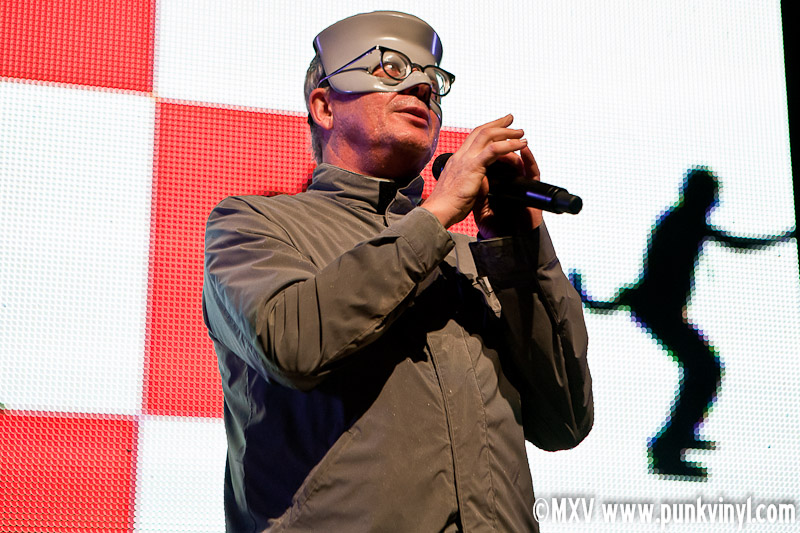 Devo fans who either didn’t want to go to Lollapalooza to see them or just wanted a chance to see them an additional time under better conditions had their chance to do so Thursday night at the Congress Theater. The band is playing shows again to support the release of their first new album in years, Something for Everybody.

The show was scheduled to have the doors open at 7:30 which should have meant the opening band would start about an hour later. However no one bothered to mention that they would have over two hours of DJ’s “spinning” before the show would actually start. The DJ’s all used laptops so it’s unclear as to what exactly they were spinning up there as it appeared all they had to do was press play in iTunes and look like they were doing something. When the first pair left the stage, another one came and took their places and the crowd was growing increasingly annoyed and impatient. Every once in a while Perry Farrell would come out and say the show would start soon as the laptop driven torture continued.

Eventually the pain stopped and it was time to finally start the show, however it would seem that during the previous two hours no one bothered to set up the first band’s gear so the audience had to endure even more waiting while the band set up and did a sound check. When this was finished the band finally took the stage.

That band was Dirty Projectors. They were a six-piece band evenly divided between male and female members. They played this really odd music that seemed heavily influenced by the Clash when they did reggae songs or Big Audio Dynamite and some world music. The songs were very long and full of mellow guitar noodling and in half the songs it sounded like the female singers were just making monkey sounds like “ooh ooh ahh ahh”. It was bizarre to say the least. A lot of the songs they played sounded like the one that came before it and after what felt like three weeks but was only an hour, the band finally stopped playing and left the stage. They sure got a long set for an opening band which in this case wasn’t a good thing.

Devo then finally took the stage to the delight of a near full Congress Theater (and that place isn’t small). They came on stage decked out in their new costumes complete with masks. They opened with “Don’t Shoot” from the new album and followed it up with “Peek a Boo,” and then “What We Do”. The new songs sounded great live which isn’t surprising as it is a solid album.  They played a healthy amount of newer material and sprinkled in some older songs in with them. As they played they had video images running constantly on the giant screen behind them which was visually striking and really fit well with the band’s image.

About halfway through their set they played “Whip It” and afterwords they left the stage as a video started playing with some narration going over it. When the video finished the band returned to the stage in their classic yellow jumpsuits and sunglasses. They played “Uncontrollable Urge” and it sounded amazing. They did their usual shtick with lining up and trading places and the crowd loved it. They then shed the jumpsuits and played a handful of old classics like “Mongoloid,” “Jocko Homo”, and “Smart Patrol/DNA”. The band played them perfectly and there was dancing and clapping going on all over the Congress Theater. They ended the main set with their epic, “Gates of Steel”.

The band returned to the stage one last time to do an extended version of “Beautiful World” and the Booji Boy made an appearance for the rest of the encore! It was kind of hard to decipher what he was saying in that high-pitched little kid voice, but at one point it had something to do with Michael Jackson. he even had bling on in the form of a big Devo necklace. When it was all said and done the band played a little over and hour and every single minute of it was completely entertaining. They were in fact so good that it made up for all the frustration and torture everyone had to endure waiting for them to play.

Additional photos from the show are available here.