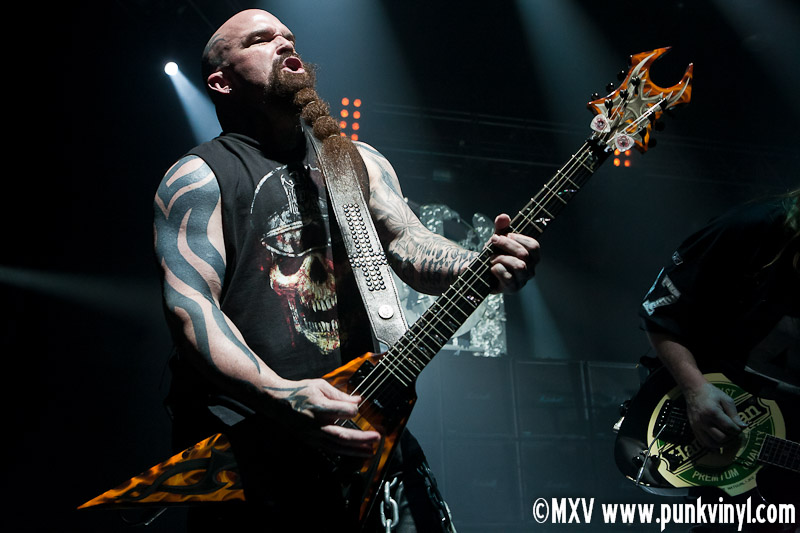 Last night was the biggest night of metal that Chicago has seen in years as the American Carnage Tour made a stop here in the Windy City at the UIC Pavilion. The tour was like a trip back to 1990 with Slayer, Megadeth, and Testament sharing the stage. Three heavyweight metal legends all in one place on the same bill is a rarity these days and it attracted a humongous crowd of energetic fans.

Testament took the stage early as a steady stream of people were still filing into the arena. They came out with all guns blazing. They played their trademark thrash metal with the same fury that they did in their heyday and they sounded great. The songs were fast and sometimes complex and as the guitarists shredded, the drummer kept the pace fast and steady while the singer spent a good deal of time up on the drum riser singing to the sky. They had a lot of fans who turned up early to see them and the band got a very warm reaction. They played close to an hour and it was a very solid performance, and one that was being filmed for a DVD they are working on.

By the time Megadeth took the stage, the main floor was full as was many of the surrounding seats downstairs and some upstairs. The stage filled with smoke and the band came out one by one as the opening notes of “Holy Wars… The Punishment Due” began. The crowd was super excited when they all took their places on stage and the band proceeded to put on a metal clinic. A big part of the center of the main floor crowd became a big circle pit that revolved around a group of folks in the center standing there. It was like people finding safety in the eye of the storm. Megadeth played the entire Rust in Peace album, in order and it sounded amazing. The guitar work was spot-on and Dave Mustaine’s trademark snarling vocals were sounding as sharp as ever. During one song, Vic Rattlehead even made an appearance on stage donned in a business suit! When the band finished playing all the Rust in Peace songs, Dave finally spoke to the crowd where he said he didn’t want to waste their time by listening to him talk and figured they’d rather hear them play. They came back and did a few more songs and closed their set with, “Peace Sells But Who’s Buying” in which the entire audience sang along to the chorus. Seeing them play that song alone would be the price of admission. If they had played “Wake Up Dead” it would have been one of the best shows ever in the world of metal. They proved that time has not slowed them down at all and that Megadeth still has a lot to offer.

The crowd hadn’t grown tired after Megadeth’s set and in fact seemed to grow even more and started chanting for Slayer. There was a curtain in front of the stage that starting having Slayer logos projected on it while some guitar feedback started and soon upon the first sign of the bands signature riffing sound, the curtain dropped to reveal the band as they started playing “World Painted Blood”. This new song, the title track to their new album, sounded even better live than on their album which is no small feat to top. From their they played the entire Seasons of the Abyss album which sounded amazing. The dual guitar attack of Kerry King and Jeff Hanneman is perhaps the most insane and powerful guitar duo in the metal universe. The crushing riffs these guys play are topped only by their blazing hyper-speed solos. Slayer has the crunchiest riffs around, something legions of bands have tried to emulate over the years but no one can even come close to equaling these too. Bassist and lead vocalist Tom Araya’s voice has that perfect metal sound where he mixes high-pitched wailing with guttural growling and some good thrash yelling. His vocals are as powerful and menacing as the music the band is playing and Dave Lombardo has to be one of the fastest and most precise drummers around. The main floor was a huge circle pit and those not partaking were pumping fists and banging heads in unison.

After completing the Seasons of the Abyss songs, the band finished the evening with some old classics starting with “South of Heaven”. This got the crowd ready for what was to follow, and that was “Reigning Blood”. That song not only got the crowd to form the biggest circle pit of the night, but also showed the crowd why Slayer is the best metal band of the last quarter century; it was simply incredible. They then played “Aggressive Perfector” and ripped right into the final song of the night, “Angel of Death”. Everyone went crazy and when they finished they thanked the fans, tossed out handfuls of guitar picks and drum sticks and then the gigantic crowd spilled out into the street still chanting, “Slayer”. Everyone was blown away by their Slaytanic power!

The American Carnage Tour proved that while 20 years may have passed since the albums featured by two of the metal heavyweights on the bill, metal is still alive and well and that these guys are still the cream of the crop.

A few additional photos from this show can be viewed here.