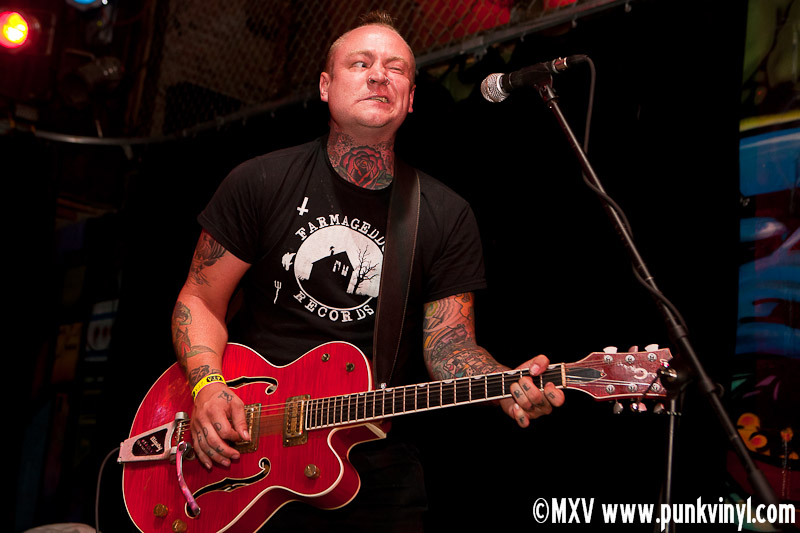 Last night The Goddamn Gallows made their long-awaited return to Chicago after spending way too much time away from our city. They headlined a show over at Reggies in the South Loop on a four band bill.

Chicago natives, Dirty Switch took the stage first. They seemed really timid and lacked any kind of confidence. They played a slow to mid-temp garage-rock. The bass player stood sideways looking down the entire set and the rest of the band made little eye contact either. Occasionally the singer would speak a little between songs but came off as really shy. Perhaps this was one of their first shows as the music and presentation seemed very amateurish. Their set seemed to drag along and lacked any kind of spark to make them memorable.  Maybe with some more time under their belts they will find themselves.

Another Chicago band, the Krank Daddies took the stage next. They were a three-piece rockabilly band that had a good look to them along with the traditional stand-up bass being one of the instruments. The singer/guitar player had a sort of southern greaser type of accent to his voice and had a great singing voice and was an energetic player. The bass player looked like some sort of Brooklyn brawler and was equally charismatic. Their drummer was quite skilled and was the glue that kept the band on track. Their songs were pretty quick-tempo and really catchy and they talked a lot between songs and had a real fun aura to them. They were great showmen and are a band that even if you aren’t a fan of the style of music you’d probably end up really enjoying live. They were one of the highlights of this evening for sure and probably should have played third instead of second.

Nothing to Gain had awfully large shoes to fill since the Krank Daddies set the bar really high. They started off fairly strong playing their style of psychobilly which was pretty good, but not as good as what came before them. It was in the middle of their set where things fell apart. First they played what had to be the absolutely worst played cover of a Misfits song ever which is hard to do considering Jerry Only has been playing shitty covers of Misfits songs for years now. This particular one (“Where Eagles Dare”) was played sans-bass and the bass player of the band who sang it did a lousy job. If you are going to waste time learning to soil some classic punk song instead of using that time to write your own song, at least learn the lyrics! From there they did a couple other songs without the bass that were pretty bad and that killed all the momentum that had going thus far. They managed to do a pretty good Buddy Holly cover at the end of their set but it was too little too late.

The Goddamn Gallows finally took the stage and seemed like they were raring to play. Their normal drummer, Baby Genius, was absent because he is currently in jail so Avery, their spoon-man/washboard-man filled in for him and did a damn good job. The band plays some great psychobilly and the singer/guitar player, Mikey, has this great classic raspy croon that is one of the key ingredients to the band’s greatness. The band has such great and solid songwriting that they are really a cut above the many bands playing this style of music and should be at least as big as the Necromantix, if not bigger. Their songs also incorporate early rock and blues so they have this sort of old-time meets modern-day thing going on that just works well. They were super energetic and fun showmen too. They played a bunch of newer songs and a few old favorites and put in close to an hour of great music that just flew by, ending the weekend on a really high note.