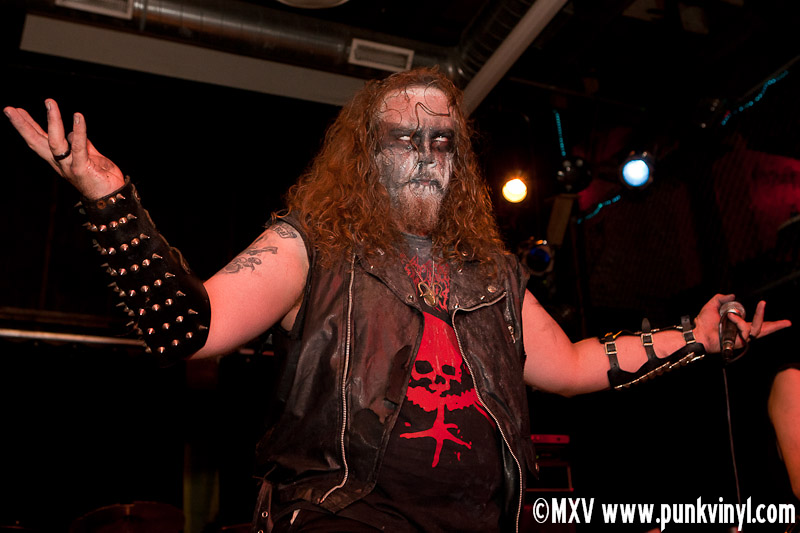 Wednesday night was a big night of Metal at Reggies as bands from all across the globe converged for a show. Enthroned made their long-awaited return to headline a four-band bill.

A local band named Cardiac Arrest opened the show. They played some really speedy death metal with thrashing guitars and guttural vocals. They were pretty damn heavy and got the evening started off on the right foot.

San Diego natives, Pathology quickly followed. They played some ultra heavy death metal. The guitars were down-tuned into a key so low that it rumbled the entire club. Their drummer, who was in The Locust, was a non-stop double kick-drum attack with all kinds of fills and heavy pounding. That guy must have some of the strongest legs in the world to keep up that pace for their 45 minute set. The singer seemed like such an unlikely front-man for this type of music as he had this weird-looking smile that almost said “hey look at me, I’m on a stage” but when it came time to sing, his growling, grunting vocal style sounded like it was pulled from the depths of Hell as the veins in his neck and head would start to bulge. Then when he’d pull the mic away from his mouth he’d be back to that childish looking grin. They were pretty good but there wasn’t a lot of variety between their songs and after a while it started sounding like the same songs being played over and over.

Hailing from Australia, Destroyer 666 played third to a suddenly full house. They wasted no time getting to work and as soon as they strapped on their instruments, they went full-speed into their first song. They play a mix of death and black metal with a bit of thrash elements thrown in for good measure. They are one of those bands that has that “it factor” that just elevates them above many bands in their genre and they had this great, extremely powerful wall of sound. The two guitars/one bass attack was relentless and their singer growled his head off with a sort of thrashy black metal style. The crowd went crazy for these guys and they played about an hour and it flew by like it was five minutes.

A band that has gone through so many lineup changes in their career that you’d need a flow chart to track them, Enthroned, took the stage as the final act of the evening. These Belgium Black Metalists have been around in one form or another for almost twenty years now. Their singer is a very large and intimidating individual that looked a bit like a satanic viking. His vocals were super intense and brutal and commanded attention. He stalked around the stage as the band belted out some really intense black metal that had a thick, fast, and dark sound. They played a mix of older and newer material and they didn’t waste a lot of time between songs with much talking, they just got down to business. The band was all painted up in corpse-paint and the guitarist with the hoodie on looked like some sort of deranged psychopath like even though he was the smallest in the group, he’d be the one to kill you. They put in about an hour’s worth of music and put on a stellar performance proving that despite about 1100 lineup changes, they still have what it takes to deliver the dark goods!