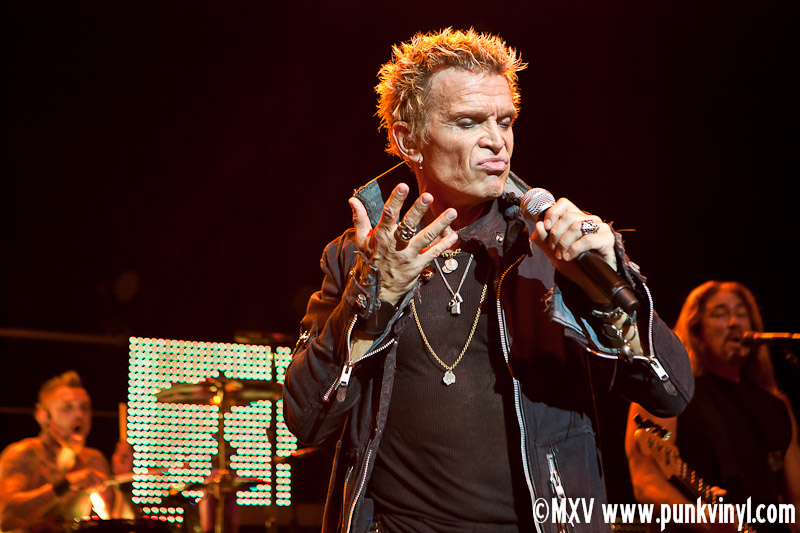 Wednesday night, Billy Idol made his return to Chicago to perform a sold-out show at the Riviera. The man has really enjoyed a nice career over the years starting with Generation X in the 1970s, then after going solo in the 1980s he had a number of huge hits. Motorcycle accidents, drugs, and aging haven’t slowed old Billy down though as he has been touring his ass off this year.

Slash was the opening act for this show. Unless you have lived in a cave the past 20 years then you know him from his being one of the key members of Guns n’ Roses. You kids may know him as the guy you had to battle in Guitar Hero. He had a full band backing him that included a singer who sounded a bit like Axl Rose when he sang high parts. Slash came out donning his trademark top-hat and shades and they opened with “Ghost”. From there it was a mixed bag of songs spanning Slash’s various bands he played in, including renditions of the Guns n Roses hits: “Nightrain,” “Civil War,” “Rocket Queen,” “Sweet Child O’ Mine,” (which got a huge pop from the audience and he ended his set with “Paradise City” which sounded great. The crowd really got into the Guns ‘n Roses songs and tons of people were dancing during them. The new material he played from his solo record sounded good too. It was a solid set of good rock songs.

After a rather lengthy wait while the crew worked their magic in tearing down Slash’s equipment and setting up the stage again, Billy Idol and his band took the stage. Joining Billy Idol on this tour once again was Steve Stevens, who played guitar on many of Billy’s records in the 1980s that were so popular. The band all lined up on the platform behind the drum set and the lights flashed as the band started the opening chords to the Generation X classic, “Ready Steady Go”. That was one great and energetic way to start the show and Billy sang much of it standing up on the platform behind the drums as the rest of the band came down the stairs. When the finished the song they immediately went into “Dancing With Myself” which got a huge roar from the crowd and people were dancing around everywhere and smiling and singing along.

In between songs Billy Idol would talk a lot to the crowd and sometimes share some stories pertaining to the song they were about to play. They played some hits like “Eyes Without a Face, “”Flesh for Fantasy” and “Sweet Sixteen” along with some newer stuff. Mr. Idol was in fine form and would dance around the stage and always had that trademark snarl on his face when he wasn’t smiling. His voice sounded great and the band played flawlessly. During the song, “Scream” Steve Stevens had a guitar with a video screen in the body that displayed all kinds of images while he played and the frets lit up with red LED’s. It was pretty neat looking. For the last song of the main set, Slash came on stage to join the band in their rendition of The Doors’, “LA Woman” which they retitled, “Chicago Woman”.

The first encore consisted of a lengthy guitar solo by Steve Stevens and then two more Generation X songs, “King Rocker,” and “Running with the Boss Sound” and another song before ending the encore with “Rebel Yell” which the entire audience was dying to hear based on the deafening roar that came from them all when the opening chords and keyboards started. The entire audience was up on their feet (even in the balcony) dancing along to the song.

A few minutes later they came back for more which included a drum solo and a cool rendition of “White Wedding” that started off acoustically before going into the full-blown version. This was prefaced by Billy Idol telling Steve Stevens to “show them what a hit song sounds like”. The band ended their show with “Mony Mony” which also got a huge pop from the audience and was a high note to go out on. When all was said and done Billy Idol and his band played about 90 minutes of extremely fun and entertaining rock and roll and gave every person in that packed house their money’s worth. Age hasn’t slowed Mr. Idol down one bit and he still can put on one hell of a good rock and roll show!