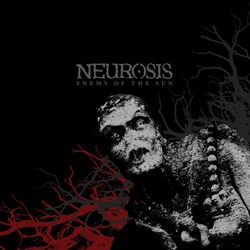 Neurosis – Enemy of the Sun reissue

When Neurosis released Souls At Zero in 1992 they went from being a rather mediocre hardcore band to something awesome that defied description. When I spun that LP for the first time I was floored and never heard anything like it at that time. I really thought they were onto something special and that album was one of my two favorite albums of that year (coming in a very close second to the Skinny Puppy album released that same year). I thought Neurosis was awesome and wanted more of this new style of music from them asap.

One year later Enemy of the Sun arrived in my mailbox and upon the first listen I think I promptly shit my pants. This album put the previous one to shame and was about 11,000,000 times heavier, thicker, and darker than Souls at Zero. That CD did not leave my car’s CD player for most of that year. I saw Neurosis play at Lounge Ax on the tour for Enemy of the Sun and for almost an hour and half they put on one of the most intense shows I ever witnessed. When they were finished I stood there with my mouth still hanging open in a lake of my drool. It was one of the closest things I ever had to an out-of-body experience.

Enemy of the Sun was without a doubt one of the most original and one of the heaviest records ever made. This album was where Neurosis tapped mastered the force and became themselves. The music is punishing and relentless. It is a non-stop barrage of dark and heavy sounds. The songs took tribal drumming and laid layers of painfully thick and loud guitars and a low-end like no other band had seen at the time. They also peppered in keyboards and samples in there and made this incredibly confrontational, dark soundscapes that were punishing in the best way possible. Enemy of the Sun is an attack on all the senses and hits you right in the soul and rattles every bone in your body. The songs were long and complicated, yet somehow maintained an organic feeling underneath that intimidating wall of sound.  Songs like “Lost,” “Raze the Stray,” and “Enemy of the Sun” were so ahead of their time that they spawned a whole new genre of music that just now has picked up a lot more steam with bands that fall into the post-metal category like Isis, Mouth of the Architect, and others. Had it not been for Neurosis going through whatever magical metamorphosis they did to make Enemy of the Sun, none of those bands would exist today. And what’s more is Neurosis topped this masterpiece on their next album, Through Silver in Blood! Not only that but they are still as relevant as ever though have become a lot less prolific in recent years. However those fortunate enough to catch their rare live appearances will tell you the band is still as intense and awe-inspiring as ever.

Enemy of the Sun celebrates its 17th year with a facelift. This reissue features a re-tooling of the cover art by Josh Graham who took the original artwork (which was way too orange if you ask me) and made it much more aesthetically pleasing. There’s actual contrast now and you can see the image a lot better now that the background is gone and replaced with black. The full-color booklet features all the lyrics printed inside along with all the recording information. The CD is housed in a standard jewel case tucked inside a nice slipcase with printing on all four sides. This new CD contains two bonus tracks: “Takeahnase (demo),” and “Cleanse II (live)”. Both of these songs were included on a European release of the CD but were never available on the domestic version originally released by Alternative Tentacles. It doesn’t say whether or not the disc has been remastered but it may have as it sounds amazing and maybe a little louder than I remember my original disc sounding.

Enemy of the Sun was an album that defined Neurosis as one of the most original and heaviest bands ever and one that defined an entire genre of music. It’s importance can’t be stressed enough and anyone who was foolish enough to have gone the last 17 years without hearing this album needs to get this reissue immediately. This absolutely gets my highest possible recommendation.

Simply put this is one of the most original and heaviest albums ever created and one that ended up defining an entire genre of music. One of the most essential albums of the last twenty years second only to the album that followed it.