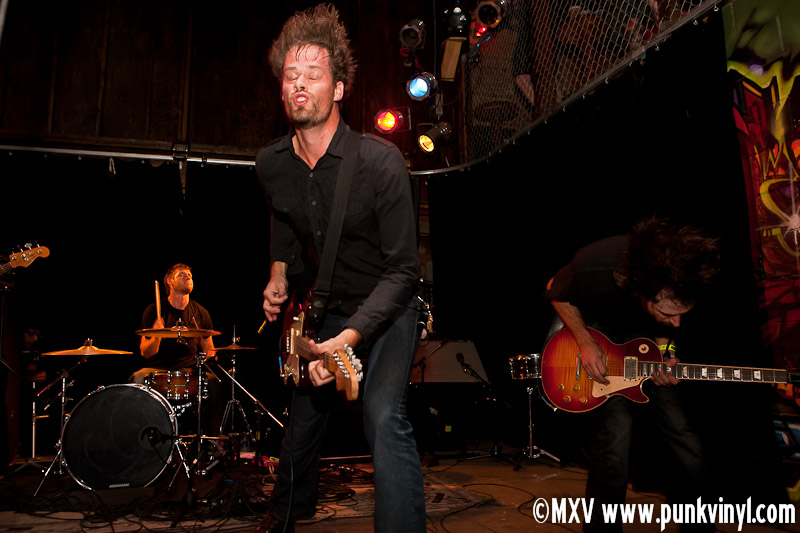 Last night Reggies was once again host to a great lineup of bands, four of them to be exact, who gave those willing to go out on a school night some great entertainment for their hard-earned cash. Caspian was joined by a solid trio of opening bands that was even better in person that it looked on paper.

The Felix Culpa got things started as the club started to take life. They were a sort of indie rock band with some post-hardcore elements. Their songs were melodic overall but they’d explode into these really powerful breaks that were riff heavy and really catchy at the same time. They were extremely impressive and there seemed to be a good group of people in the audience that came solely for the purpose of seeing them. This is going to be a band to keep and eye on for sure, they put on a great show.

The Crown and Two Chairmen took the stage next. They had their own lights they set up all over the stage and even brought a small smoke machine. In the middle of their first song as it was reaching its apex, they kicked on their lights all at the same time and it blew a fuse! It was a shame this happened too because the song was on the brink of being amazing. Once they got the power back they continued their set of all instrumental post-rock songs. They were very reminiscent of Red Sparowes in their guitar sound and some of their song structures. The songs would start quiet and simple and build into really big and loud climaxes. They too were pretty amazing and a band well worth seeing.

The Crown and Two Chairmen

The Alaya Conscious played third and they were a local band. The best way to describe them is that they are the equator in a planet whose axes are The Fall of Troy and Russian Circles. They had the complex instrumental song structures of the first Russian Circles album along with the melodic singing and guitar virtuosity of The Fall of Troy. Their blending of these two styles worked amazingly well and they played a set that was so entertaining that it felt too short! In fact they played the shortest set of the evening.

Caspian set up their equipment on stage and each of their three guitarists had a wooden platform of effects pedals and gimmicks stringed together the likes of which has never been seen before. Seriously between those three there had to be 50 different things strung together. Much like their gear was complex, so was their music. Caspian has to be one of the most complex bands in their genre. Ironically for as complex as their music is, they have one of the most minimalist drum set configurations ever seen, but man their drummer can do a lot with so little.

Caspian played about an hour’s worth of material from all three of their incredible albums. Their songs were slow and building, piling up layers of sound including samples and background sounds into these explosive instrumental rock epics. They blend from the soft and subdued to the intense and loud like no others and these guys are easily in the upper echelon of bands playing this style of post-rock. Their songs are exhilarating and the songs played in a live setting presents their material in a much more full and powerful way that simply can’t be captured in a studio. Regardless of how good you think their albums are (and they are beyond excellent), you will be simply stunned by how great they are as a live band. Simply put, their set this evening was one of the best hours of the entire year.

Reggies really hit one out of the park last night with this show, one of the most solid and complimentary lineups assembled in a long time and those of you who passed this one up should be kicking yourselves repeatedly for missing this.