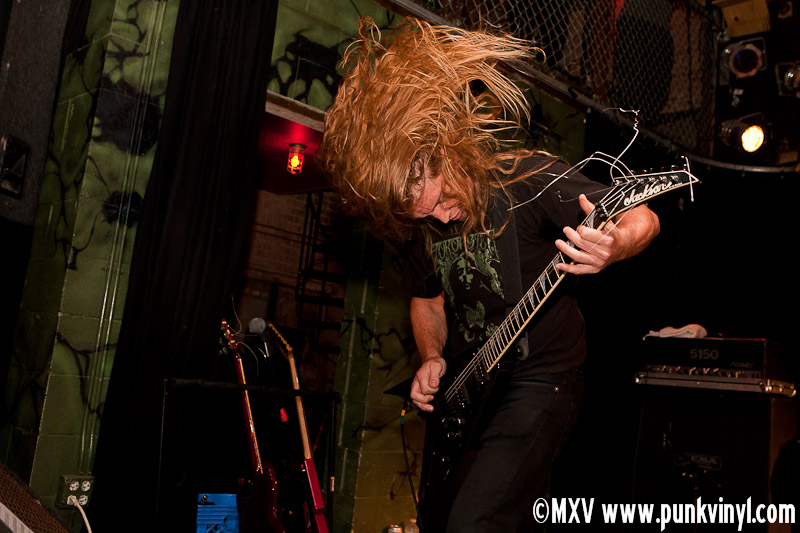 Those folks who opted out of going to see Primus Saturday night had a better show option over in the South Loop. Reggies was the host to an epic night of metal bands, three of which were concluding their tour here in the Windy City.

Local black metal band, Komandant, got things started. All the members of the band were dressed as some dark soldiers and everyone but the singer was wearing gas masks. They had these flags set up and the singer spent part of the set doing vocal duties behind a giant podium like he was the leader of a dark army. It was a really interesting look and gimmick and the singer was very menacing looking. They played very speedy black metal that was loud and precise. The singer had a raspy, evil voice that was low-pitched. He looked very pissed off the entire time. They played for thirty minutes and it was a very entertaining set. They are definitely a band worth going out of your way to see if you are a fan of extreme metal.

A band from Florida, Dark Castle, was the second band of the evening. This band featured a woman who played guitar and did vocals, and a drummer who played these jumbo-sized drums. They played this really low-end heavy doom metal that was beyond epic. It has to be seen to be believed that only two people make such an amazingly huge sound. The guitars were so loud, and tuned so low that it was bone crushing in its intensity and force. The drums sounded like nothing else you could describe. They were so full, so heavy, and so powerful that it was almost super-human. The vocals, done by the woman named Stevie, were growled with such ferocity that you’d think it was a man delivering them. Their being buried in the mix only made the music that much more intense. This is a band to watch out for and honestly, they stole the show this evening which was no small feat as the entire roster that evening was full of top-shelf bands. Dark Castle needs to come back and play here ASAP, as in now!

Chicago’s best kept secret, and one that shouldn’t be, The Atlas Moth, took the stage next and they sure had big shoes to fill after the last band! They were more than up to the task. The few weeks on the road has only made the band that much better on stage. Their spacey post-metal/metal hybrid was as intense, powerful, and louder than ever. These guys mix precision with reckless abandon into this really great blend of metallic styles that is simply awe-inspiring. Surprisingly they didn’t play anything off their new covers EP that came out last week. They did play a good chunk of material from their album though which is some primo stuff.

Nacthmystium was the final band of the evening. They are a band that keeps getting better every time they play as well. They are a four-piece band who play a sort of progressive blackened metal. Their songs were very speedy, almost thrash-like in the presentation, but they had these great guitar lines that were downright melodic and very hooky. These guys are really onto something with the direction they are headed and they are such a solid band, and a great live act. They played about an hour and it was a great and powerful set. These guys certainly deserve the accolades that other metal bands have been getting, some of which aren’t nearly as good. Chicago seems to have a large and diverse metal scene going on now and Nachtmystium (along with The Atlas Moth) are among the cream of the crop.

As usual the sound in the club was crystal clear and those who made it out to this show couldn’t have asked for a better night of music.