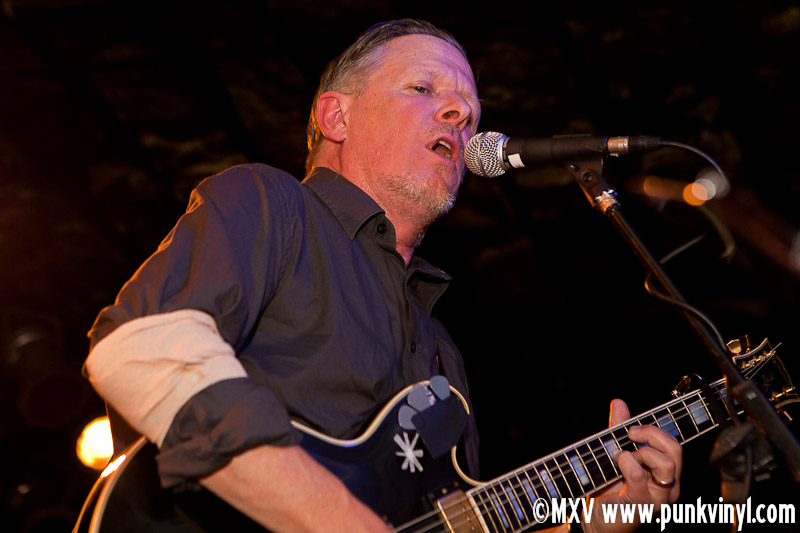 Last night the Bottom Lounge had the privilege of hosting the long-awaited return of New York legends, the Swans. It has been a very long time since the band last toured, and after such a long hiatus, it was looking more and more like the band was done, but thankfully they aren’t!

Baby Dee was the opening act. This band featured a large man, dressed like a lady. He/she played the accordion and the harp and sang in a mostly falsetto voice like Tiny Tim. There was also a cello and a violin player on stage serving as a backup band. The band played these demented folk songs that was like some sort of bad acid trip. They were very odd and entertaining for the first couple songs, but after that the material felt like the same song being repeated again and again. Had they played half as long the gimmick wouldn’t have worn as thin. The crowd seemed pretty open-minded however and the band received a pretty warm reception by the packed house.

When the setup for Swans was complete, a loud droning feedback started emanating from the stage and it went on for a full ten minutes before Swans member, Thor Harris, took the stage and started playing the chimes that formed the intro to “No Words/No Thoughts” from the new album, My Father Will Guide Me Up a Rope to the Sky. After a couple of minutes of this, the rest of the band came on stage and they continued the song, which opened up into a massive sonic pummeling. The sound was insanely loud and perfectly mixed. The band was super tight, pounding on their instruments to make them emit sounds that were stunning and punishing at the same time.

Michael Gira is an intimidating front-man who demands attention and respect. He often has a stern look about him and at times you wonder if he is going to snap and kill someone. He channels this into his amazing vocals which are equal parts terrifying and beautiful. When the man starts yelling, it is fear-inducing and gets your attention, when he sings and things get melodic, he will lull you into a sense of peace that will soon be interrupted by the band breaking out into another sonic pummeling. Twice during the show, Michael Gira chastised a small group of morons in the crowd who were playing human bumper cars by randomly pushing and slamming into the people around them, most of them clearly uninterested in such a ridiculous practice. It was another highlight of an amazing show and more bands should follow suit.

The band played some new material, which is some of the strongest Swans material in years including, “My Birth”, and “Jim”. This was mixed with Swans classics like “Beautiful Child” and “I Crawl”. The greatest moment of the flawless performance came in their amazing rendition of “Sex God Sex” which was so intense it was chilling. All the songs were played incredibly and often extended to make them equal parts fresh and familiar.

They finished their two-hour set with “Eden Prison”, another song from the new album, and it was long, complex, and covered all the emotions, exploding in the middle with a sonic frenzy that was deafening. Anyone not wearing earplugs that night probably suffered a large amount of hearing loss. They came out for a very quick encore and left the crowd sweaty, with ringing ears, and completely satisfied. The rebirth of the Swans is nothing short of awe-inspiring and the world of music has just become a better place for their having returned.