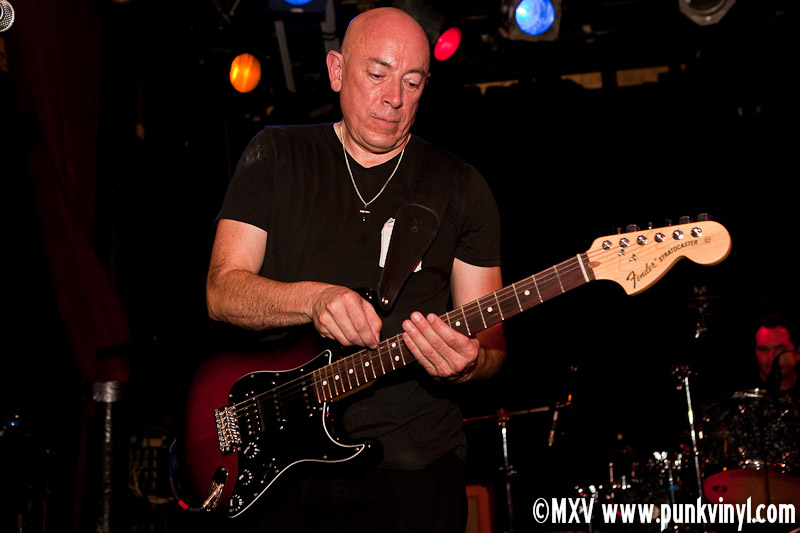 Riot Fest is officially underway as of last night when the  sauna known as the Double Door hosted a very special night for old Chicago punks (and younger fans of the old punk). To mark the 30th anniversary of the Busted at Oz compilation (something that has been out of print for about 28 of those years), many of the bands from that compilation and era rose from their respective graves for a giant reunion show. It wasn’t just any old reunion either as the entire show was a benefit to help the homeless in Chicago.

The first band of the evening was a two-piece that consisted of Steve Bjorkland of Strike Under and Steve Economou from The Effigies. They called themselves High Value Target. Steve E played bass while Steve B sang and controlled a drum machine and a laptop along with some effects. Their music was very Wax Trax-esque with a hint of Gary Numan. It was completely different that anything you’d expect at a show like this, but also very good. They really should record some of these songs for a proper release and in fact if Wax Trax was still around, they’d be a perfect fit for that label.

Rottenfinko played second. While they weren’t a band back when any version of Oz was in business, the singer, Willy, was a mainstay of the club and was also pictured on the cover of the album. Willy is still a die-hard punk and his band had a very old-school, almost British street punk sound to them. They put on a short but fun set and Willy was a very charismatic front-man.

One of Chicago’s most criminally obscure bands, Toothpaste, quickly followed. They featured their mostly-original lineup and it was a real treat to have them play a show again. They did the songs from their EP and then some, including their big hits, “Oh Yeah Come On”, “Palestine” and “Spy Guy”. They ended their set with a song of theirs that sadly never saw a release on vinyl, “Freud”. It was a real treat to have this band be a part of the show. This was the first set of three for the Oz reunion MVP of the night, Camilo Gonzalez.

Next up was a band very closely related to Toothpaste, and that was Silver Abuse. This band featured a mostly original lineup, the same one they’ve been doing sporadic shows with over the past few years. They opened up with, “Buggery Barn” which sounded a lot like their song, “Cuban Homo Farm” in disguise. They played their trademark minimalist, sloppy art-punk in their usual entertaining way. They played the Chicago punk classic, “Bombshelter” which they always make the claim to be the band that does it better. They also played “Anti Hot Dog”, “Ron Santo”, “Kill the Commies” and a few others. They are always a fun band to see when they do these rare gigs and this was no exception.

Legendary Chicago punk band, “Strike Under” was the next to play. Original member Steve Bjorkland informed the crowd that his brother isn’t speaking to him and the original bass player is recovering from a stroke and that’s why he was the only original member on the stage this evening. He found himself some more than ample musicians to take their places in the form of Vic Bondi and Dave Shields of Articles of Faith and Joe Haggarty from Pegboy. They opened with “Elephant Graveyard” and proceeded to play five of the seven songs they ever recorded/released. It was short but sweet and if there ever could be a full reunion of the original band, that would be nothing short of amazing. In this substituted form however it was still one of the top attractions of the evening.

The Strike Under Experience

The Subverts starting the next inning and featured their original lineup. They opened with, “Radiation Nation” and it sounded like they haven’t aged a year since they disbanded. They played a really solid set of their classic speedy punk songs and they all sounded great. For a band that has only played live twice in the last twenty-something years (and both being in the past 12 months), they sure sounded like they never stopped. This was a band that didn’t get as much recognition as they should have in the annals of Chicago punk history.

Punk rock super heroes, Naked Raygun, headlined the evening. This was billed as the Busted at Oz lineup with Jeff singing (of course), Camilo Gonzalez on bass (completing his trio of performing duties this evening), Santiago Durango on guitar and Jim Colao on drums. Unfortunately Jim broke his shoulder in a biking accident and wasn’t able to play so current (and longest running) NR drummer Eric Spicer sat in on drum duties and did a wonderful job of it.

For as much as everyone loves the version of Naked Raygun with John Haggarty playing guitar, Santiago was the first and he is still the man! His guitar sound was incredible and once he got over the hump of faulty equipment during the opening song, “Managua”, he effortlessly proved that all the years of being away from performing on stage has been extremely kind to him. It was a real treat seeing him play with a band he helped start, playing some classic songs he penned.

The band played a very different set from current Naked Raygun shows. They played tracks from Basement Screams and Throb Throb almost exclusively, the only exceptions being a slower version of “New Dreams” which was done in the tradition of the demo they recorded of it when Santiago was still playing with them. They also did, “Hate the World” which must have been an unreleased old NR tune they never recorded, and they did a cover of the Avengers, “We Are the One” in which Jeff had to have someone’s daughter stand on stage and hold up the lyrics for him to sing from. Much to Silver Abuse’s chagrin they also proved that Naked Raygun’s version of “Bombshelter” was the superior one, this time being presented in a slower version than that on Basement Screams.

After a half an hour of every song Santiago remembered how to, or practiced playing, the band left the stage only to have them come back again at the insistence of the crowd. They decided to play “Managua” again to make up for the equipment problem that plagued their first attempt. It more than made up for the first one. The only thing that kept it from being a perfect set was the omission of, “Libido” which was on Busted at Oz! We’ll forgive them though as it was a great close to a very fun and once in a lifetime event that was the best start to Riot Fest in its five-year history.