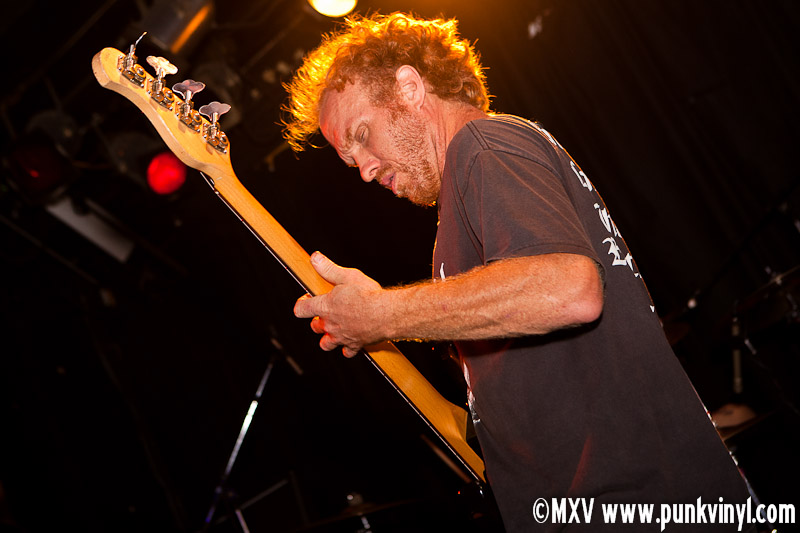 One of the late options for Friday’s Riot Festivities included the long-awaited return of Corrosion of Conformity headlining an evening of bands at the Double Door. This wasn’t just any version of COC, this was the version, the original three members playing nothing from that period of time we’ll pretend never happened in the 1990s.

Keelhaul played first. They were super loud and abrasive. Their clangy guitars sounded awesome as they attempted to pummel the audience with a wall of sound. Their songs were fast and heavy and their one guitar player had a weird playing style where he held the guitar kind of high and sideways as if the thing was repelling him. It was the man/guitar equivalent of trying to put two magnets together with the wrong sides facing. They were really intense and put on a solid half hour of metallic noise rock that would have been a good fit for Amrep if they were still an active label instead of releasing random art projects.

Double Negative soon followed. They are a hardcore/thrash band with a very retro feel to them. Had they been around in the 1980s there is no doubt they would have been a staple of United States hardcore. As it stands they are a very solid band that while not breaking any new ground, are super energetic and very good at what they do. It’s amazing how these guys are veterans of punk rock yet play like they are a bunch of teenagers. They were a non-stop bundle of energy and aggression.

The crowd swelled to near capacity by the time Corrosion of Conformity started setting up their gear. This version of COC was the core lineup of Mike Dean, Woody Weatherman, and Reed Mullin. They promised a set of Animosity and Technocracy songs and that is exactly what they delivered. They sounded great. They were very heavy and they played those songs perfectly and with a lot of enthusiasm. They also played the songs from their new 7″ that sounded really good in a live setting. The crowd was way into their performance too, many old folks got all liquored up enough to start a pit and go crazy.

The band played close to an hour an there wasn’t a dull moment in the entire set. Everyone loved it and it was another great performance during a fun week of shows so far. Hopefully this version of Corrosion of Conformity will stick around for a while and continue to tour more as they are certainly a pleasure to have back.