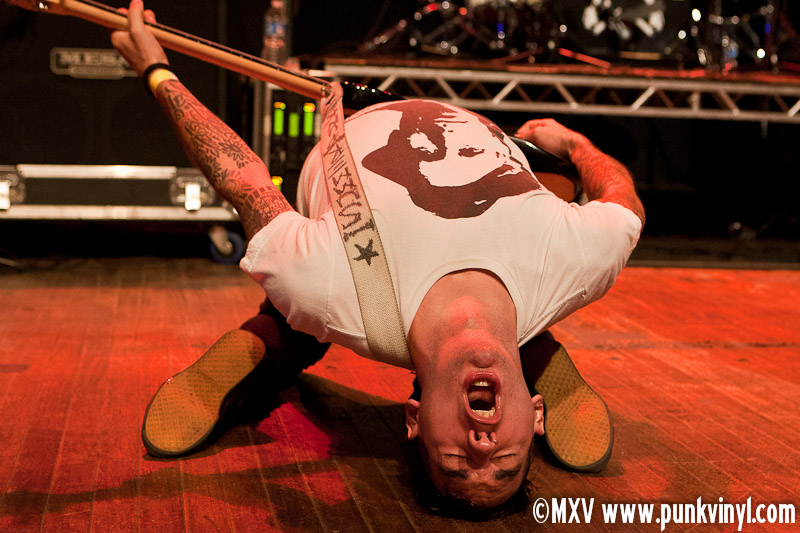 Now that the weekend started, it was time to expand Riot Fest to start early in the day. There was a full array of bands taking turns entertaining the large crowd a the Congress Theater on Saturday

First up, The Swellers. These Flint, MI natives played a short set of melodic pop-punk. They had a good guitar sound and some ear-pleasing vocals. They played with a lot of energy and their set, while not overly original, was pretty good. They definitely have that modern Warped Tour sound to them and if they haven’t hit that circuit yet, they ought to as they probably would go over quite well with that crowd too.

Canadian exports, The Flatliners were the next to play. They had a good sort of raspy vocal sound and the band played melodic mid-tempo punk rock. They had loud guitars and a lot of sing-along parts to their songs. A very upbeat band that seemed to be the theme of the day for this show. Their half-hour set was a short and solid one. They certainly seem to be keeping up the tradition of fine Canadian punk bands.

Anti-Flag played next and by this time the Congress was almost full! They came out already in 5th gear and were running all over the stage. They played their early Clash influenced punk rock with such amazing energy that it was infectious. The band members ran, bounced and jumped all over the place as they performed a great set of sing-along punk anthems. They absolutely were the most entertaining band of this show and someday can probably headline the Riot Fest if they keep putting on performances like this one.

The newly reunited Snapcase played next to an eager crowd. They played a 40 minute set of material that felt like was more heavily weighted with newer songs. They sounded OK for the most part but there was something that felt “off” through their whole performance. Perhaps it was fatigue from being on the road or they just had a bad day but their set left a lot to be desired and sort of felt like they were phoning it in. It was nice to see them on stage again performing, but it seemed to lack the enthusiasm they had in the past.

As the stage was being set up for Less Than Jake, there was a Riot Fest first to happen on stage and that was a wedding! In what was the quickest wedding ceremony ever, a couple from out-of-state arranged to be married on stage during the Riot Fest by none other than Riot Mike himself! They wheeled out a fancy cake and Riot Mike performed a quick ceremony and united the happy couple. It was over in the blink of an eye but they were a very happy couple and you couldn’t think of  a more unique or punk rock wedding than that. They went backstage to cut the cake and share it with the staff and bands while Less Than Jake walked out on stage ready to perform.

Less Than Jake was the polar opposite of Snapcase both musically and in their performance. They played their entire Losing Streak album to the biggest crowd of the day, and one that went absolutely nuts for them. The band was all smiles on stage all the time. They were visually fun to watch because they moved around a ton and you could tell they were really into playing, something that always makes for a better show. The crowd was a non-stop sea of crowd surfing and singing along and the security guards really had their hands full during their hour-long set. Once they finished up the Losing Streak material, they played a handful of other songs until they were told their time was up. They could have played another hour and the crowd probably would have still wanted more, it was insane.

Fresh off the Warped Tour this summer, Pennywise took the stage next. They played a very solid set of songs spanning most of their career. Their new singer is starting to look more comfortable in his role than he did at Warped Tour and this performance easily topped that one. It’s hard for a band to switch singers after such a long and successful run and while the verdict is still out on whether or not these guys will be able to pull it off with 100 percent success, they definitely are leaning towards doing it. The crowd seemed very into their performance and while they weren’t Less Than Jake crazy, they certainly were no slouches either.

After Pennywise played some uptight band of prima-donnas who didn’t want their picture taken were supposed to play next, but it wasn’t worth sticking around for (or even mentioning their name) as the evening was about to be kicked into overdrive over at the AAA building for one the “secret shows”. And this one was going to be huge…