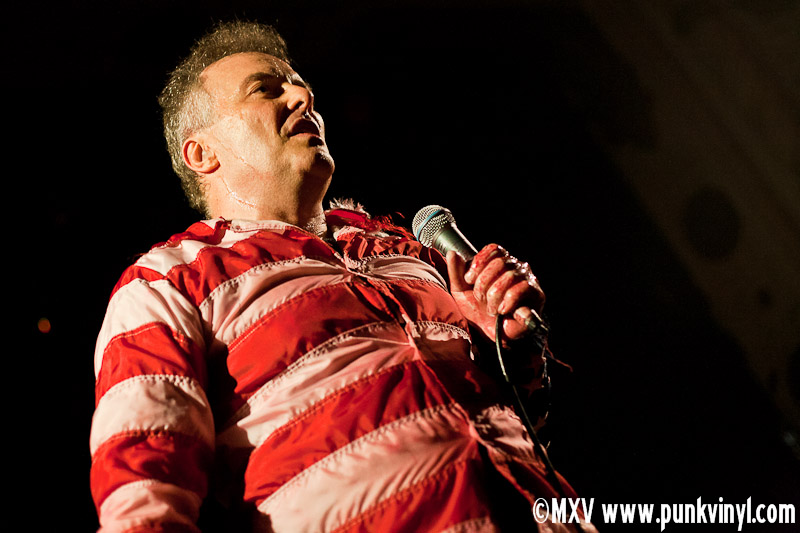 Riot Fest kicked into high gear Friday night where fans had a bunch of different options to choose from. Over at the Metro, the highlight was the reunion of Articles of Faith. They were playing with Jello Biafra but honestly AOF was the real reason to choose this show because while Jello still tours and plays music, Articles of Faith haven’t played in 25 years (with one exception being a mini tour of Europe in 1992).

Explode and Make Up got the show started early as most people were still fighting traffic or being sardined into the trains during rush hour on the way to the venue. This band features Dennis from 88 Fingers Louie on vocals and the super talented Jeff Dean (of like 100 various Chicago bands) on guitar. They played a very crunchy yet melodic mid-tempo punk rock with nice loud guitars. They were very energetic and they didn’t let the thin crowd slow them down any, they played like the place was packed (and by the time AOF were ready to play the place was). It’s a shame more people didn’t get there in time to see them because they missed out on a fine performance.

Explode and Make Up

Riot Fest veterans, Shot Baker had the second slot on the bill. These guys have played a show at almost every Riot Fest and over the past couple years have really grown into an excellent band. Their loud, fast-tempo punk was spot-on this evening and they proved why they are deserving of a spot on each year’s fest. Their half-hour set flew by

Twenty-five years of waiting came to an end when the members of Articles of Faith walked out on stage. They all looked to be in a good mood and they were greeted by a very warm reception from the crowd the minute they walked out on stage. They opened up with “Every Day” and it instantly felt like 1983 again. The band played the songs like they never stopped, it was obvious that they took this reunion very seriously and must have practiced their asses off. Vic’s voice sounded as powerful and angry as ever, time has been very kind to his vocal abilities.  The rest of the band all played their parts like professionals, the band sounded great and had a lot of energy.

They didn’t waste much time between songs and blasted out song after song in fairly rapid order. At one point there was a bit of guitar difficulty that was remedied by about the third song and that didn’t slow them down one bit. They played such greats as “Remain in Memory”, and “I Got Mine” which sounded as good as they did a quarter century ago. For that night, the band hadn’t aged a bit. Vic shed his guitar to sing a few songs free to stalk around the stage holding a microphone and he was very energetic and didn’t hold still for a minute.  The rather thin sound of the Metro couldn’t even hinder the band’s performance, they put on a punk rock clinic and showed the crowd why they were among the very best in Chicago. Once they played “False Security” and “Bad Attitude” they pretty much cemented their place in Riot Fest history as best performance of Riot Fest 2010. They played about 50 minutes and the crowd wanted more when they were done, but sadly they couldn’t deliver as it was Jello’s turn.

Articles of Faith had the crowd worked up into a frenzy and they maintained that energy when Jello Biafra and the Guantanamo School of Medicine took the stage. Jello came out in a bloody lab coat and bloody rubber gloves. He looked like an old man and at first it was a little startling just how old he has gotten, however once the band started playing this man moved around with the speed and stamina of a teenager. It was unbelievable how the man can run around a stage and sing without stopping for more than about a second in any one place. He’s an impressive front man to say the least and he was as animated as ever.

The band played some newer original material and played a couple of Dead Kennedys songs like “California Uber Alles” which the crowd went totally apeshit for. The band, which included the legendary Andrew Weiss on bass, sounded great. Between songs, Jello would talk at length about a variety of political topics including the war, the economy and the presidency and health care. Usually these tirades would segue into an appropriately themed song. He certainly gave the crowd plenty of food for thought before they’d bash each others brains out playing human bumper cars during each song. The band played for over an hour and was a great close to a solid night of bands. Jello may have been the headliner of the show, but Articles of Faith was the absolute highlight of the night.

Jello Biafra and the Guantanamo School of Medicine