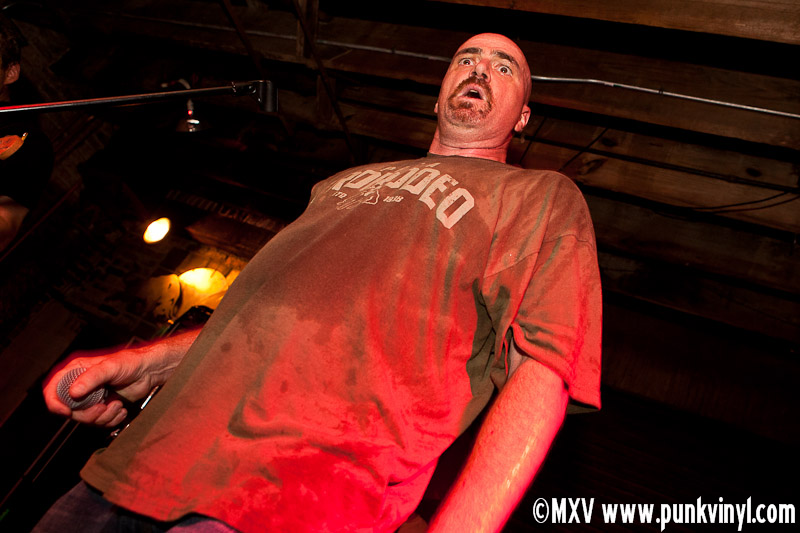 After the day-long festivities at the Congress Theater a real treat was planned for the evening over at the AAA. For one of the “secret shows” of the evening, the worst kept secret thank to the band announcing it the night before was Articles of Faith doing a special performance at the AAA building. This was exciting news to a whole legion of Chicago punk fans both old and young and the chance to see the band do one last reunion show, and a longer one at that was a very special event.

The place was absolutely packed full of friendly faces by the time the band started making their way onto the stage and there was an excitement in the air that wasn’t present the night before in the Metro. Maybe it was the better location this evening or perhaps it was just a general feeling that this was going to be something really special, but whatever it was, everyone in that crowd was in a good mood, very social and very eager to see Articles of Faith play some of their incredible songs one last time.

The band took the stage and Vic Bondi made some small talk after which the band started their set with “Five O’Clock” and it sounded about 1000 times better than it did the previous night at metro. The sound in the AAA was better and the performance by the band was better (and they delivered the goods at that Metro show too!). It was spot-on and everyone in the crowd was showing their approval in various ways without turning into a bunch of human bumper cars and being stupid! It was in fact one of the best crowds ever at a punk rock show in the modern-day and that just made the show that much better.

They went right into “Every Day” and then they pulled out one of the really big guns with “I Got Mine” and in the middle of the song the club blew a fuse and the sound went out! The band stopped playing and someone reset the breaker and the band started the song over again! This time the power remained on and was able to handle the power on stage, and that song sounded incredible. From there they played just about every song you’d ever want to hear from their discography including “Bad Attitude” which had the entire club singing along and Vic handing the mic to various folks in the crowd to help with the chorus, and “False Security” which is easily the best song they ever wrote. Every song sounded perfect, and the band probably played even better this night than any night when they were an active band at their peak in the early 1980s. At one point near the end of the set, Jeff Dean (guitar player to nearly every band in Chicago these days and engineer for the new AOF record) joined them on guitar for a few songs and that just added even more power as he is a great guitar player with that classic Chicago punk style to his playing.

After all the great songs, including some really good new ones from their new EP and one additional power outage,  the band took a few minutes to catch their breath and came back and did a couple of non-punk cover songs, and then surprised the crowd by ending their set with the one song that everyone was upset wasn’t listed on the written set-list, “Up Against the Wall”! People went nuts and Vic sang the song perfectly like in the past, and the band played flawlessly. They played for well over an hour when it was all said and done and it was a perfect performance and a perfect selection of their material. This evening Articles of Faith put on the best performance of Riot Fest 2010, and they also were host to one of those once in a lifetime events that will go down in history and be remembered for years. The band and the folks behind Riot Fest hit a grand slam this evening.