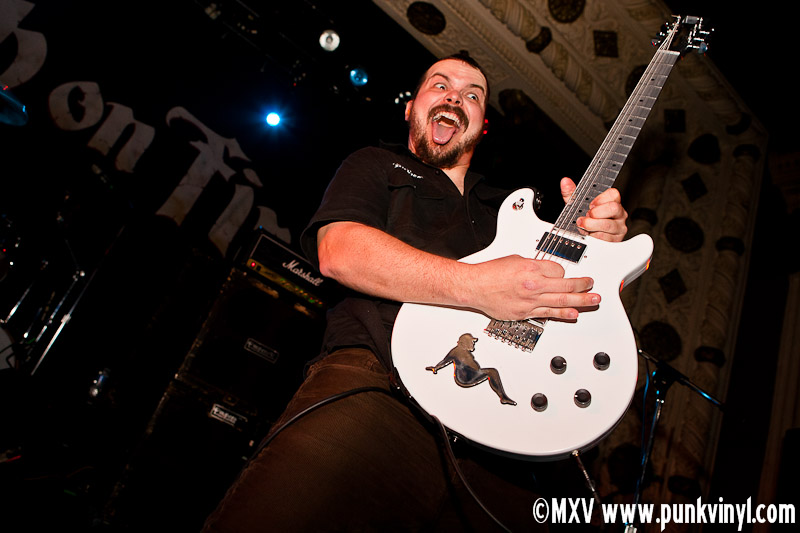 As the week came to a close so was Riot Fest as the final shows of the week were taking place on Sunday. The show at the Metro was a Riot Fest first in that it was a show full of metal bands, and damn good ones at that. This was the first time Riot Fest has incorporated this style of music into the event and hopefully it is something they plan on repeating.

First up was Droids Attack. They had Sinistar (the old video game) painted on their kick drum and the guitar player had the side art from the Centipede arcade game tattooed on his arm. These two things alone made them cool, it was just a bonus that they played some good songs too. They had a sort of southern-fried noisy rock vibe going on with crunchy sounding songs. They played for a half-hour and were pretty good.

One of the finest bands in modern metal, Kylesa, returned to Chicago for this festival on their tour with Torche. The band seems to change drummers every time they come to town. Their two guitar, two drum, single bass formula makes a wall of sound very powerful and unique. This band has really carved out their own unique sound that blends a variety of metal and punk styles. They played some new material as well as a few older favorites. The set was intense and they are easily one of the best live bands around. The only complaint one would have of their set this night was that it wasn’t longer!

Torche was the next to take the stage. They came out smiling and never really stopped smiling the entire time they gave the crowd a musical ass-beating. Their melodic metal is super infectious and addicting, like crack for the ears. They played a lot of newer material and near the end they busted out a couple old heavies like “Charge of the Brown Recluse”, which was so much thicker sounding than on their album and so satisfying that it was like a sonic orgasm. These guys should be huge, they are such a great band and deserve to be heard by everyone.

Although the mighty High on Fire was set to play next, a better offer was awaiting over at the Double Door for the closing ceremonies of Riot Fest in the form of three legendary hardcore bands…