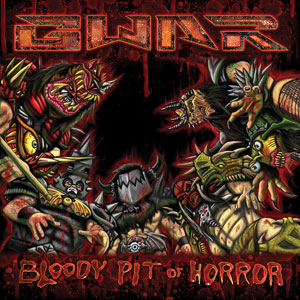 In their continuing quest of global domination, Gwar will be appearing on the Jimmy Fallon show tonight. The band will be performing their new single, “Zombie’s March” on the show. The band will be releasing a new album, Bloody Pit of Horror, on November 9th.

Oderus Urungus actually kept quiet long enough for some of his cohorts to chime in with their comments on tonight’s appearance. Beefcake the Mighty had the following to say:

“As disappointed as we are that we must reschedule our attack on St. Louis, we are simply tickled shitless that we have been invited to perform on Late Night with Jimmy Fallon! One can only assume that our shared insatiable lust for sex and drugs and rock & roll prompted the impish Saturday Night Live alumnus to request we attend his court! Regardless of the reason, we embrace this opportunity to enlist the millions of Late Night viewers into Gwar’s legions of blood-loyal slaves! How fortunate for you all!”

And even Balsac the Jaws of Death threw in his two cents:

“I feel like Hester Prynne on prom night! I am absolutely giddy to be performing for the crowned queen of late night, her highness, Jimmy Fallon”

The Jimmy Fallon show airs late night on NBC after that steamy pile known as the Tonight Show with Jay Leno.