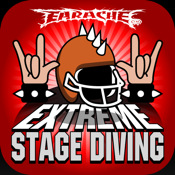 Earache Records has joined the app craze by releasing one of their very own.

Exclusive to the Apple App Store, Earache Extreme Stage Diving allows you to play along to a killer soundtrack of thrash, death and heavy metal as you throw a pesky stage diver off a festival stage and as far into the crowd as possible.  Throw the stage diver as far as you can to get a high score on the global leaderboards while trying to avoid objects such as bottles, merch stands and everyone’s festival favourite – the portable toilets!

All tracks are included in a fully integrated music player, allowing you to play along to the tunes you want, when you want.  Also included is a secret, unlockable track which can only be found in this app.

You can download the app for the low price of FREE right here.