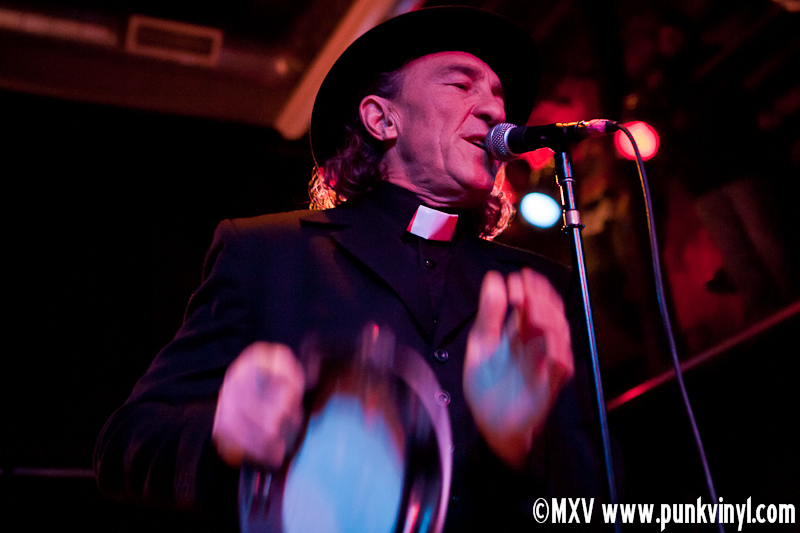 Reggies hosted a fun Halloween show starring rock legends, The Tubes. This long-running band was on a small tour and ended it with a special evening here in Chicago that featured four bands and a costume contest. The only thing missing was free candy.

First up was Springa Sonic Droogs. Now if you are wondering if the Springa is the old singer from SSD you would be correct. Springa has himself a brand new band and lives in Chicago now. Visually he was very entertaining. He first came out dressed as a pope, then for the next song he ran backstage and changed costumes into a guy in bushes for some songs about being a peeping tom. It was not a Mentors cover. He once again changed into a Joker for a follow-up. He was a pretty entertaining front man and tried real hard. The problem was the band’s music sounded like dated sunset-strip metal.It had a couple of moments that were good, but overall it just didn’t have a cool enough hook to it to be memorable.

Next up was Moist Guitars. A couple of the members were dressed in drag and the drummer was a vampire. They were a really odd band that sounded like a genetically engineered mutant offspring of the Butthole Surfers, the Dicks, and the B-52s. Their songs were all over the place and one or two even had a more classic punk feel to them. They were extremely entertaining and very energetic and their whole set was just good fun. They were a perfect fit for a Halloween show.

Taking third on the bill but last in quality was Ain’t No ER like a Stripper. Sadly the strippers were absent which was unfortunate because it may have saved a lackluster set had they been there. The band sounded an awful lot like a frat-rock band who listened to Q101 a lot during the grunge years and really likes Pearl Jam. Their attempts at funny between-song banter fell flat on the audience as well. Thankfully their set was pretty short but they should have preceded Moist Guitars instead of following them.

The finalists for the costume contest were summoned to the front of the venue so the winners could be announced. The finalists included a Daft Punk, Gil the Fisherman, Krusty the Klown, Medusa and a Minotaur. Medusa and Minotaur rightfully won as their costumes were amazing.

Once the contestants received their winnings it was time for The Tubes. The band came out and opened with an instrumental number and when they were done, Fee Waybill came out dressed as a priest and they played their first song. The band played “No Mercy”, and “No Way Out” both from Remote Control album. In keeping with that theme, Fee left the stage again as the band played the theme to I Love Lucy. When he came back on stage he had a goofy looking suit on and a TV on his head covered with a bra and panties and they played “TV is King”.

Fee is a very entertaining front-man and the band’s playing was rock solid and super polished. Despite the fact they were playing an intimate show to a couple hundred people, they played like they were doing a huge event and brought their A game like the rock stars that they are. For “Mondo Bondage”, the lights were turned off and Fee came out shirtless in bondage gear and illuminated himself with a flashlight while singing. During “I Was a Punk Before You Were a Punk” he donned a green mohawk wig and a ripped Misfits t-shirt.

The band did a long medley of James Brown covers which found Fee dressed up as the Godfather of Soul and doing his best dance moves. After close 90 minutes of playing, Fee once again changed costumes into giant platform boots that made him over seven feet tall and he had on a blonde wig and crazy  makeup. They played “Up from the Deep”, “50 Foot Woman” and ended their set with their legendary, “White Punks on Dope” which had the whole crowd singing along to the chorus. Had they stopped there it would have easily been an amazing set, but they came back and delivered even more!

For the encore they busted out their two big hits, “She’s a Beauty” and “Talk to You Later”. Both sounded as good as they did when they were big radio/MTV hits and the crowd loved it. The band put on one of the best and most entertainingly fun rock shows of the year and there was no better place to spend halloween night than at this show. If you stayed home due to crashing from a candy-induced sugar high, curse yourself for not being there.