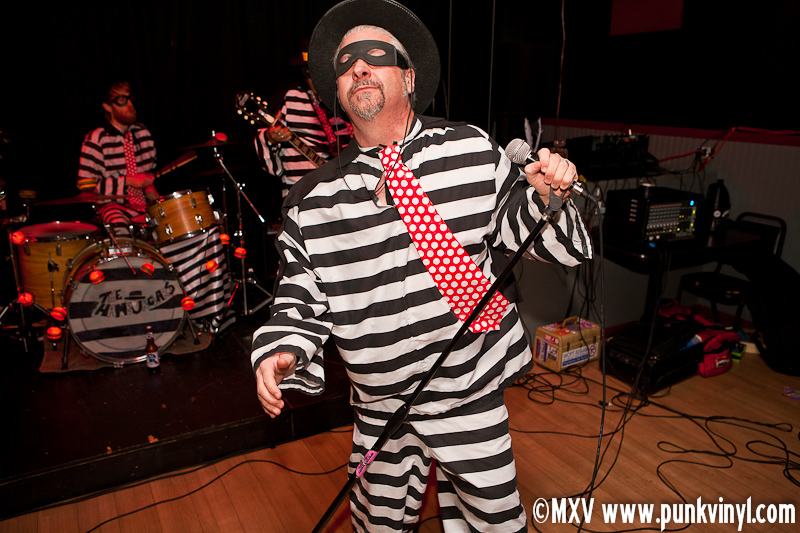 The Hamburglars and Hotlips Messiah 11/24 at Lucky Number

Thanksgiving Eve was the “pre-gobble robble” starting The Hamburglars and Hotlips Messiah; two of the better and under-rated bands from the Chicago area. They were kicking off the mini-holiday in a small bar on the second floor of the Lucky Number Grill.

Sporting a new drummer and Indian headdresses, Hotlips Messiah took the stage/floor first. They play a quirky 70’s styled punk rock with keyboards and loud guitars. They have a west coast, Screamers influence that is very cool. As the band belted out their songs with reckless abandon, lead singer Traci Trouble was stalking around the floor singing her lyrics and dancing in front of various crowd members. She’s a strong front-woman and the band put on a solid 45 minute performance that was a lot of fun.

The Hamburglars came on stage all decked out in their Hamburglar costumes and the drummer even had little hamburger lights around his kick drum. They started out with their theme song which sounded even better live than it does on their single. The singer stayed in character the entire set by saying very few words between songs aside from variations of the word “robble”. They did a bunch of cover songs too that they turned into Hamburglar themed songs like “Gigantor” where the chorus was changed to “Hamburlgars”. It was pretty amusing as was their cover of “Rebel Rebel” which was of course changed to “Robble Robble”. They too played for about 45 minutes and it was a very entertaining show that not only got the Thanksgiving holiday started off in a fun way, but also made me want to eat at a McDonald’s on the way home!