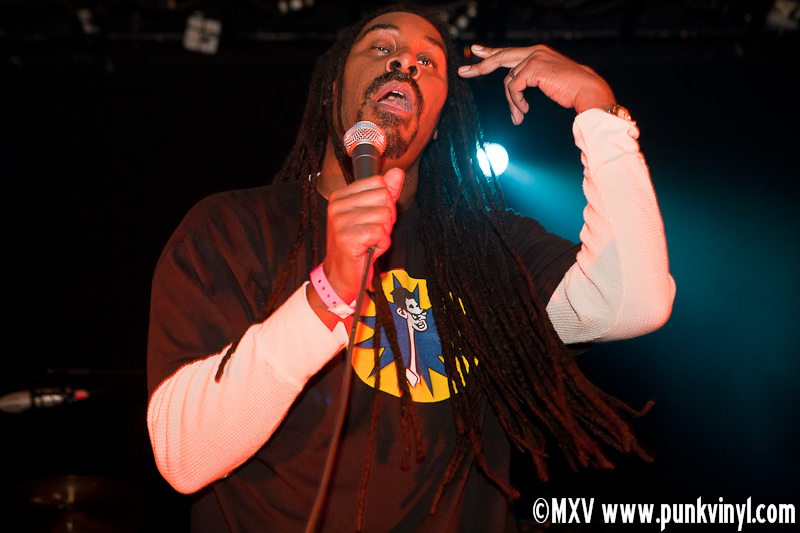 Saturday night the Metro was the venue chosen to host the return of the Bollweevils, a band that hasn’t played in close to two years. They headlined a five band bill that saw them sharing the stage with a nice lineup of bands from Chicago including 88 Fingers Louie. It also was a celebration for Dr. Daryl’s birthday!

Boom Juice started the evening off as the crowd was slowly arriving. They were a two-man band that consisted of a guy with a laptop and a bunch of gear and a singer. The gear operator also sang sometimes too. they mixed up some pop with hip-hop and dance and were an odd fit for a punk rock show but were still entertaining and added some diversity to the lineup.

The House that Gloria Vanderbilt quickly followed. They had a lot of members in their band who played a variety of instruments and a couple of them also sang. They played some off-kilter, psychedelic indie rock that bears a small resemblance to the Make-Up at times. Their musical-blender style was pretty refreshing and they put on a really good performance and are a band well worth checking out.

The House That Gloria Vanderbilt

Noise By Numbers were next. This band features Dan Vapid of Screeching Weasel/Sludgeworth/The Methadones fame along with JefF Dean of nearly every current band in Chicago fame. They played a mid-tempo poppy punk with some occasional bouts of crunchy guitar that Mr. Dean is becoming the master of. A couple of the songs were very heavy on the poppier side of things but overall they were a good band.

88 Fingers Louie took the stage as the crowd grew quite a bit. They played a fun set of songs spanning most of their career. Dennis talked a lot between songs and their set had a really light-hearted and personal vibe to it. Of all the shows they have done since getting back together, this was one of the more enjoyable performances and the band played flawlessly with smiles on their faces the entire time. The crowd was way into it too and were dancing all around the main floor. They did a Descendents cover that Daryl from The Bollweevils joined them on stage for.

The Bollweevils took the stage to close the evening and they once again proved how they were one of the best bands of 1990’s Chicago punk rock. They played a rock-solid set of many old favorite and even threw in a few new songs for good measure. These new songs were really good and had that distinct Bollweevils sound. Daryl was his usual energetic self, dancing and moving about the stage while the band belted out hit after hit. A few times Daryl came down into the barricade so he could have the crowd sing some choruses and during one song he even did a stage dive over the barricade into the loving arms of the crowd which was no small leap!

The band played about an hour and it was nothing short of great the entire time. The crowd sang along to all the songs and danced and clapped and smiled which just seemed to make the band give them even more to be happy about. The Bollweevils have never failed to deliver the goods live and this show was no exception and it was about the best pre-Christmas present any Chicago music fan could ask for.