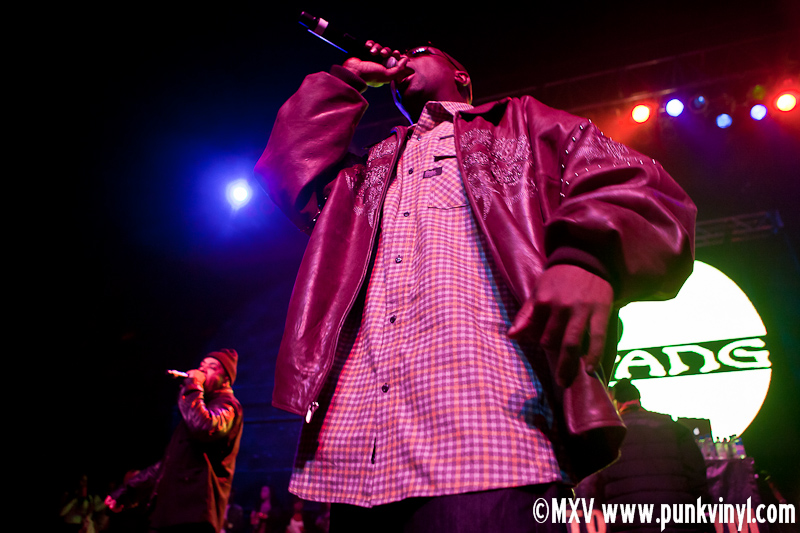 Saturday night the Congress Theater was packed to the rafters for the return of the Wu-Tang Clan. The show was totally sold-out to the point that people were waiting outside hoping to get in if people were leaving early.

Que Billah with Shocking Truth got the night started on an upbeat note. They played for a full hour and had about 100 people in their band that rotated MC roles. They had a good number of people up front that seemed to be familiar with them and they put on a very entertaining set that blended hip-hop with some dance and rock elements.

Rhymefest took the stage second despite the crowd’s growing impatience waiting for the Wu-Tang Clan. These guys blended their rap with some R&B elements and threw in some rock including starting their set with a cover of the White Stripes’ “Seven Nation Army” which halfway through the song they turned it into their own composition using the same music. It was pretty cool and they played a shorter but equally entertaining set which saw the main MC doing push-ups during one song while enlisting the help of yours truly to hold the mic while he did so!

At this point it looked like it was time for Wu-Tang Clan to come out, however one more act took the stage instead. La the Darkman was a one-man rap show who played more traditional hip-hop. He talked a lot between songs and all his conversations consisted of him introducing himself and drilling his name into people’s heads over and over and shilling his records. He said the same thing so often he may as well have recorded it in advance and just played a tape of it. When he did play his music however it was fairly entertaining as he marched around the stage waving a towel around as he rapped.

After La the Darkman was finished, another 15 or so minutes later the Wu-Tang Clan came out and the crowd erupted with applause. Nearly everyone on the main floor raised up their hands into the shape of a “W” and Wu begun their set. They had something like seven MCs, which were all the members that are still alive, taking turns rapping and taking the front of the stage. Everyone in the band was constantly on the move as the whole lot of them would circle the stage and weave in and out of each other. A lot of them were still wearing their winter coats as if they had just stepped on stage from being outdoors.

The crowd ate up their songs like candy, or smoked it like pot which it seemed like nearly everyone in the crowd was baked on. People were attempting to sing along to the lyrics, lots of hands were pumping and waving around and people were dancing and drinking. In short the crowd were having a great time and the crowd the Wu-Tang Clan attracted was quite the spectacle. The Congress Theater was the place to be and where all the fun was happening in Chicago on that Saturday Night and the Wu-Tang Clan provided quality soundtrack for the evening’s festivities and proved why they have such a large fan base.