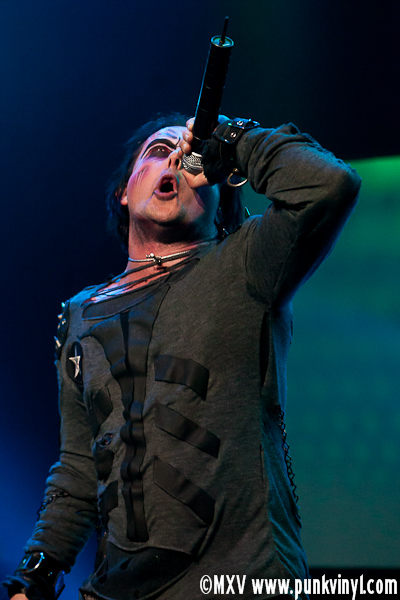 Cradle of Filth 2/20 at House of Blues

Sunday night droves of metal fans celebrated Presidents Day Eve by packing the House of Blues for the Creatures of the Black Abyss Tour, headlined by Cradle of Filth.  The venue filled up early and the place was full of eager metal fans, all dressed in black and some even wearing makeup.

Daniel Lioneye got things started early. This Finnish metal band played a speedy and aggressive style of metal with screamed/yelled vocals. They put on a solid and somewhat short set that the crowd seemed to be enjoying. They were very energetic and were definitely worth showing up early for.

Turisas played second. They were dressed like some sort of vikings or something out of Braveheart with their faces all painted up red and black. The singer looked like some sort of warrior sans the weapons and was fairly intimidating. They were a sort of medieval folk-metal band complete with accordion and violin. Their songs were very tuneful and epic and they were extremely interesting and catchy. They won over a good portion of the crowd fairly quickly with the exception of a lone drunk meathead standing by the bar who upon the band’s completion of their set, held out a thumbs-down and declared that the band sucked and should get off the stage. Rest assured he was in the minority in the audience and those with more than two brain cells to rub together seemed to really appreciate this great band.

A band that seems to never stop touring, Nachtmystium, played third. These guys get better every show they play. Super-tight and speedy experimental metal. Their newer sound is really starting to shine as they have melodic leads and catchy hooks inside their powerhouse of a metal shell. All the time on the road has done these guys a service as they are quickly becoming one of the best metal bands that Chicago has seen in a very long time.

After clearing the stage of all the opening bands gear and setting up their rather simple stage, Cradle of Filth finally took the stage to a packed house of fans chanting their name. When the familiar introduction to their finest album, Dusk and Her Embrace, started playing through the PA, the crowd roared their approval. When Dani Filth came out on stage, the crowd once again popped huge and the band tore into, “Heaven Torn Asunder,” and it sounded amazing. The band played with a passion and enthusiasm that hasn’t shown in some of their recent tours. It was like the band found some new source of energy and passion to play these songs. The band put on a black metal clinic on their respective instruments as Dani filth stalked the stage shrieking his trademark vocals. They immediately scored the knockout punch by playing “Funeral in Carpathia” from that same album, also one of the best songs they’ve ever written. These two songs alone would have warranted the price of admission for any Cradle of Filth fan, especially considering the intensity and precision the songs were delivered with.

From there the band started playing some newer material which the younger fans seemed to appreciate. Every song was played with the same enthusiasm and it was apparent the band was having a good night as each song sounded better than you could have hoped for in the live setting. Near the end of the set they even busted out something from their first album. After about an hour they ended their set, and a stellar lineup of metal with a two-song encore and left the audience sweaty, drunk, and satisfied. There was no better place to have spent a cold and rainy Sunday night that at this show; a job well done by the entire lineup.