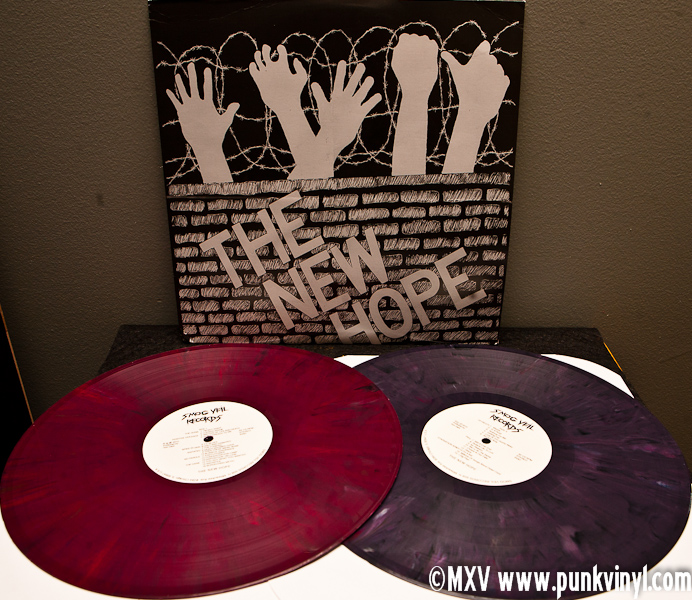 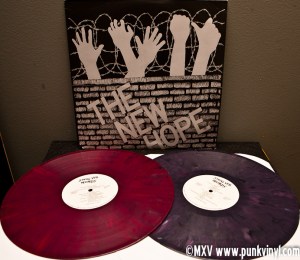 A reissue of an unknown early 1980s hardcore punk compilation of OH bands with a bonus LP of unreleased material from the same sessions. A wonderful time capsule of early hardcore.
Rating:

Back in 1983, unbeknownst to me, a compilation LP of Northeast Ohio bands was released on LP by the name of The New Hope. The idea was to chronicle the little scene happening there at the time and hopefully put that area on the map in the way that Flex Your Head did for the Washington DC scene.  Unlike Flex Your Head however, The New Hope was made in smaller quantities and must have had inferior distribution as I have never even heard of this compilation before until this reissue turned up on my doorstep one day. I curse myself for the oversight and now will have to remedy my lack of an original copy someday.

For those of you who aren’t completest with a need to own original pressings of everything, The New Hope has been reissued in a “deluxe edition” Instead of being a single LP it is now a double LP! The first record is the original compilation as issued 27 years ago. This album really did a great job of documenting a small hardcore punk scene at a time when the genre was at its prime and was not only exciting but starting to grow. The bands featured were mostly unknown outside the midwest with few exceptions and include The Guns, Positive Violence, Spike in ain, Agitated, No Parole, The Dark, Zero Defex, Outerwear, Offbeats, PPG and Starvation Army. Most of the bands didn’t last longer than this compilation but a couple of them became more well-known and put out at least one record of their own.

The music on here is early 1980’s hardcore. It is raw, mostly fast, very energetic and youthful. The recordings were low-budget and the bands varied in their approach to their speedy music. Some were more polished than others but they all share a common bond of playing fast and aggressive music back during a time when it was exciting and fresh and all these bands were high quality bands for the time period and the music on this record has aged gracefully to these old ears. This compilation really takes the listener back to a time when things were far different and exciting than they are today and the early hardcore scene was something that will never be duplicated in any form today or in the future. It was a special moment in time.

Back when this compilation was produced, many of the bands turned in more material than what was needed. Someone had the foresight to preserve these recordings and many of them are included on the second LP. The material is even presented in the same order of bands as on the first LP. It is like getting a sequel to the compilation in the same package. The extra stuff is all really great stuff too and not a bunch of throwaway tracks, not to mention in the case of a few of the acts on her, it was all the bands ever did.

The records are pressed on colored vinyl which are a sort of purple/grayish mix along with some red. It is the “randomly mixed color” option found at United Record pressing that sometimes nets some really cool results. I imagine there will be others that look different from the copy I received depending on what else was being run that day at the plant. The records come in standard paper dust sleeve and are housed in a standard black and white cover. There is a two-sided insert inside that has some great liner notes giving a history on this compilation and reproduces the pages (shrunk down to fit) of the booklet that came with the original version of the compilation. The liner notes were a really fun and educational read that made a nice addition to the package, one that was a true labor of love meant to preserve some great old punk rock.

I love it when old punk records get reissued so people can hear what they missed out on without the need of a trust fund and an eBay account. I love it even more when someone takes the care in putting out a quality reissue that eclipses the original like this one with the inclusion of so much extra material and some great liner notes. Any fan of early hardcore punk should own this record, it is like a time capsule and I can’t believe I missed out on this record back when I was young! Great job on unearthing another great artifact Smog Veil Records, you deserve a huge pat on the back for this one!