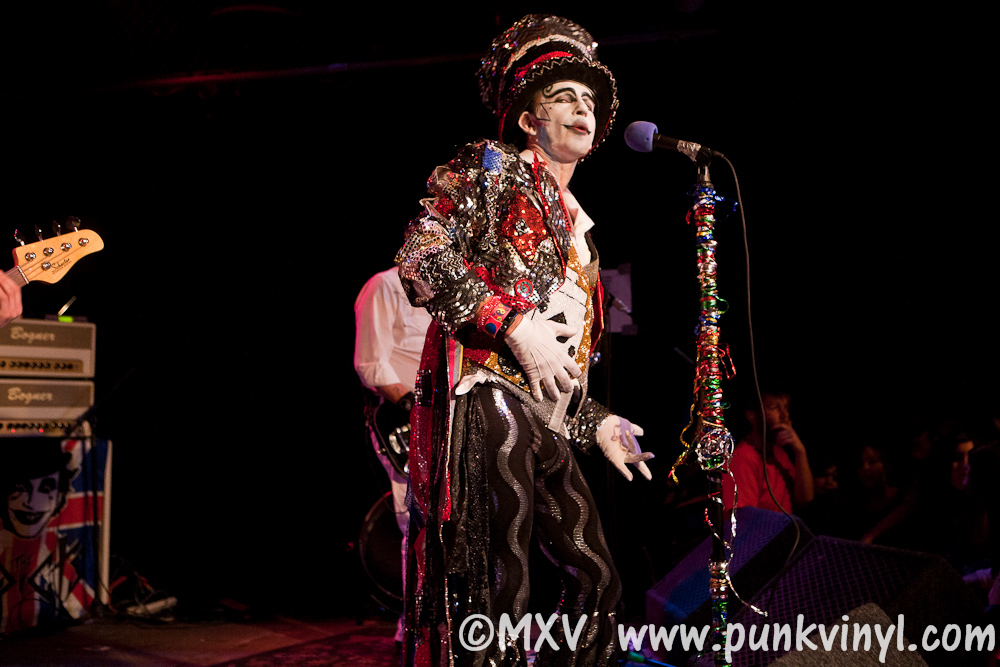 Thursday night a massive crowd of mostly young punk fans stuffed themselves into Reggies for the long-awaited return of The Adicts to our cold city. It may have been cold outside but the band got a warm and crazy reception from the crowd.

A local band, Curtains, started the show to a nearly full club. They were a sort of experimental post-punk band with a lot of early 80s/late 70s art punk influences. They played a very entertaining half-hour set.

Modern Day Rippers played next. They were a sort of lo-fi garagey punk band that definitely is inspired by 1970s punk rock. Their flamboyant lead singer was a great front-man who definitely kept the audience entertained with his goofy outfits and between-song banter. Their music was fast paced and high-energy, as was the comedy. The crowd went nuts for them too and were jumping all over the place and knocking each other down. They are definitely a great act to see live and well worth your time. They should have played right before The Adicts as they were easily the most entertaining of the three opening bands.

Juicehead played third. They were in the unfortunate position of being completely upstaged by the Modern Day Rippers and as a result their set just came off flat and seemed boring by contrast. They played fine but their brand of punk rock isn’t overly original and at this point people just were wanting The Adicts to take the stage.

The club was packed to the rafters when The Adicts finally took the stage. There were countless inconsiderate people in the audience pushing their way through people or even trying to climb on them trying to get closer to the stage. When the band took the stage and started playing the first notes of “Joker in the Pack” the crowd went nuts. People were jumping, slamming, punching, falling, shoving, singing along, drinking, and you name it. The entire floor was moving around and there was no safe place to stand to avoid being either hit, or knocked down or unwillingly moved due to people ramming into you. While all that chaos was going on, the crowd sang along to all the choruses and those of age still managed to down beers.

Monkey, the singer of The Adicts, was dressed in his usual makeup and was wearing a giant top hat. He threw playing cards into the audience during the opening number and throughout the show would throw confetti, streamers, and various other trinkets and changing his costume a couple of times and wearing different hats. The whole spectacle of The Adicts is very much like an arena rock band in a punk rock size. Think of it as early Kiss but with streamers and balloons instead of fire and blood.

Then band blazed almost non-stop through all their hits with only taking short breaks to fix instruments or talk to the crowd. They brought a whole bevy of girls up from the audience to sing and dance on stage during one song and just about every square inch of stage was occupied for it between them and the band members. They band played over and hour which included an encore where they did a couple of songs without Monkey before having him return to the stage in a new costume to deliver crowd favorites, “Viva La Revolution” and “Let’s Go”.

The band more than gave the crowd their money’s worth and were easily as good this time as their last visit here about six years ago. They made an overstuffed room full of punk fans extremely happy and probably quite bruised and sore as well.