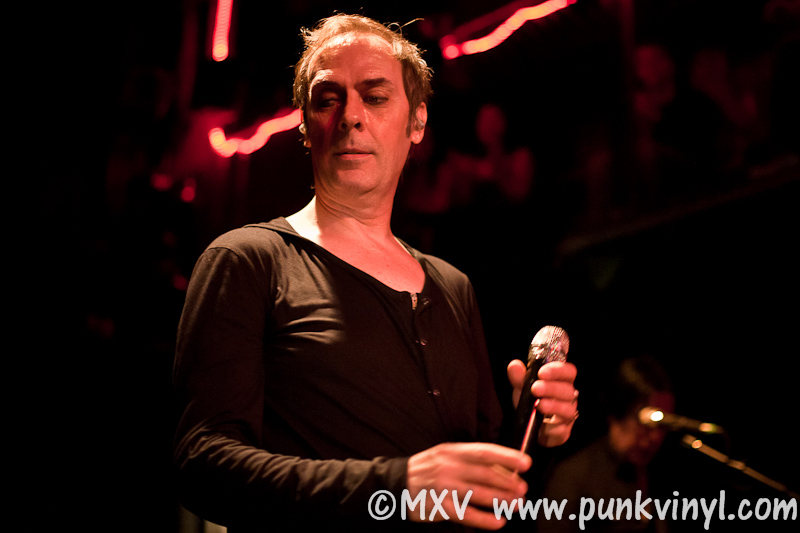 Sunday night the alternative rock legend, Peter Murphy, made his long-awaited return to the Windy City headlining a rare intimate show at Reggies. It had been many years since Mr. Murphy played a solo show in our City and the excitement level was high for this show. The chance to see him in such a small venue was a rare treat that had up until now been unheard of since the disbanding of Peter’s original group, Bauhaus.

British native, Livan, opened the show to an already packed house. He looked a lot like En Esch from KMFDM 20 years ago sans the German accent. The music he played varied depending on the song. It was as if he couldn’t decide between glam rock, post-punk, melodic heavy metal, and alternative rock. Some songs worked really well and some songs fell a little flat but as a whole it was a fairly entertaining set and the whole band had a good stage presence. Livan was practically upstaged by his own drummer who was one of the most animated drummers ever to take the Reggies stage. This guy had all the big arena rock drummer moves down like tossing and spinning his sticks, crossing arms, making crazy faces, swinging the sticks around his head,you name it. It was mesmerizing and the guy also had Beavis and Butthead tattoos on his chest. The drummer alone made Livan’s set worth watching.

After well over an hour of his crew trying to solve some technical issues, Peter Murphy and his band took the stage to the most packed crowd Reggies may have ever seen. They all clapped and yelled with delight as the band took their places. He opened with “Low Room” from the Holy Smoke album and it was immediately apparent that time has been very kind to Peter’s voice as he sounded in top form. He sang the song beautifully as his talented musicians did the song justice. They quickly followed it up with a brand new song, “Velocity Bird” which sounded fantastic.

One thing that really stuck out about this evening’s performance was just how chatty and personable Peter Murphy was. He spent a great deal of time talking and telling stories to the crowd. He even busted out some self-effacing comedy by telling the crowd he has gained some weight in his advancing age and now has “man tits” which he let one female in the front of the crowd feel for herself. Said female offered to return the favor but Peter either didn’t hear her or that was his way of politely declining. He often had the crowd laughing with his various stories or his playful teasing of his crew and the whole thing made the vibe of the room more of a group of people hanging out while someone happens to be singing excellent songs rather than some choreographed rock performance. It made the intimate setting feel that much more intimate.

Peter and the band played an amazing selection of songs spanning his entire solo career including a few new ones. He also played a small number of Bauhaus songs too which was a very wonderful surprise. Bauhaus selections included “Ziggy Stardust” (which sounded amazing), “Burning from the Inside” and even an acoustic version of “Bela Lugosi’s Dead” which was merged with “Strange Kind of Love”. The new material made people excited for his forthcoming album and you couldn’t have asked for a better selection of favorite from his numerous solo albums.

He played for close to two full hours which included two encores that contained “Huvola”, “Cuts You Up”, and “All Night Long”. When they decided to call it a night the entire band came up to the front of the stage and took a bow to a giant round of applause and thank yous from the very happy audience. Peter Murphy gave the fans an evening they will never forget and it was perhaps the best performance inside a club that has an amazing track record of great shows under its belt.