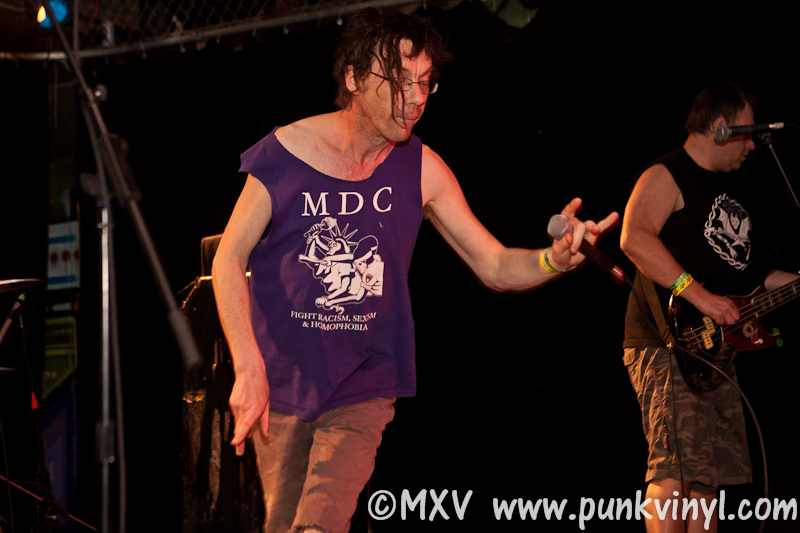 Two punk rock veterans from the early days joined forces to play a show together at Reggies last week. One of the UK’s finest, the Subhumans, returned to Chicago after a couple of years away and brought long time CA by way of Texas natives, MDC along for the ride.

A newer local band, the Neutron Bombs took the stage first. They played melodic, punchy, punk rock with a definite 1970s punk influence. Their songs were pretty short and catchy and they seemed like a very tight and well-rehearsed band. They definitely fit on a bill with two old punk bands and their 30 minute set went by rather quickly.

Daylight Robbery played next. They had a guy who played guitar and sang like John Doe of X and a girl who played bass and sang just Exene. It was like they were an X tribute band who wrote their own songs that sound like X instead of playing X cover songs. It was uncanny just how much their first few songs sounded like X. Their last few sounded a bit more original and less like X except for the singing.

MDC took the stage to a bigger audience than they played to last time they came through town which was nice to see. These guys have been plugging away for three decades now. They started off fast and furious and their trademark hardcore sounded as good as always. They played a mix of older songs along with a bunch of newer material as well. The newer songs sound a lot like the older songs as the band hasn’t really messed with their formula the last three decades which is a good thing. The band sounded great as did Dave’s vocals and the crowd went crazy. They received a very warm welcome from the crowd and it was well deserved.

It didn’t take that long for the gear to be swapped on stage and the Subhumans to appear on stage. They played a plethora of their “hits” and paid a lot of attention to their old EP’s. The crowd went nuts for every single song. They jumped, slammed, bounced, and sang along to all the songs. The band sounded great and it’s a pretty safe bet that they have never put on a bad show. Dick paced back and forth on stage as he delivered a solid vocal performance and he’d occasionally talk to the crowd between songs, mostly to announce what the next song would be. The one thing that was a bit of a bummer was how material from the Worlds Apart album was mostly ignored but with such a large catalog of great records, there simply isn’t enough time to play them all. They played about an hour which included an encore and gave the crowd about ten times their money’s worth.