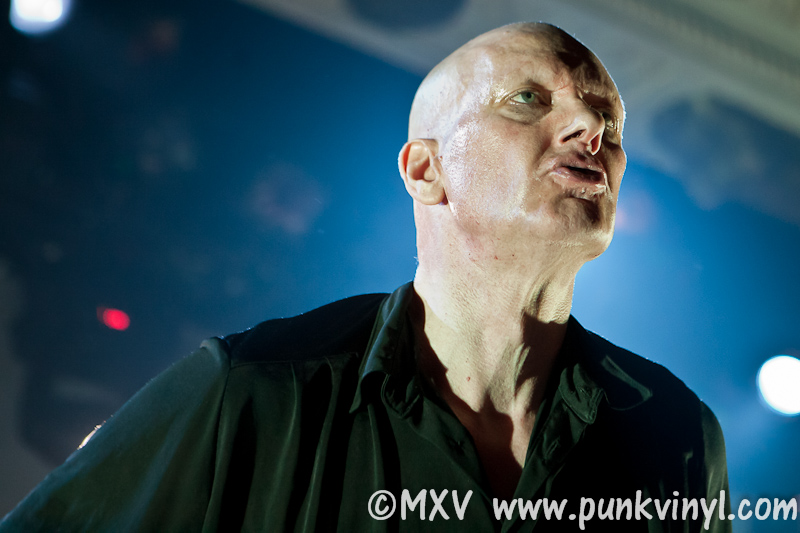 Some of the saddest days in Chicago were when the store closed, the label folded, and Jim Nash passed away. That sadness would be replicated once more when Dannie Flesher passed. Chicago lost the two people who changed the city and the music scene forever but their legacy remains in the memories and hearts of all who were in some way touched or influenced by these two pioneers.

To honor their memories and to raise money for a very good cause (the Center on Halsted), Julia Nash (Jim’s lovely daughter) decided it was time to put together a big even which fell on the 33 1/3 anniversary of Wax Trax (what a fitting number!). She reached out to many of the musicians who did time on the label and even did time working at the store and label and asked the members who were no longer playing together to reunite for this event, and asked those that were still active to come participate in the event. The result was pair of shows that featured an all-star lineup that is an industrial fan’s wet dream.

The two-day event sold out in record time and excitement was building for weeks leading up to this event. The club was packed to the rafters with fans eager for a night of nostalgia, for a chance to see some magical musical acts take the stage one more time, and for a chance to pay tribute to the late founders of Wax Trax. The immediate vibe when walking into the club was that something special was happening, something that will be a once in a lifetime event. It was like a high-school reunion you really want to attend, full of like-minded fans who were either there at the time and lived it with you, or were too young to have been a part of the scene but were fans and influenced by it. There was an overwhelmingly positive feeling in the entire club that is unlike anything that has ever happened in the Metro.

A humble and somewhat shy Julia Nash came on stage to thank the audience for coming, tell a couple of stories, and introduce Rights of the Accused. While the band was never on the label, nearly all of them worked at the Wax Trax store back in the day and were certainly part of the underground Chicago music scene. Singer, Mike O’Connell, came out dressed kinda like a cop in the Village People complete with a disco ball belt. He was a comical and very entertaining front-man and the band played about a half hour or so of their trademark party rock. They had two guys in gladiator outfits as their on-stage “security” who also sang backups during a couple of songs. Near the end of their set John Haggerty, former Naked Raygun (and Pegboy) guitarist, joined the band on stage for a pair of old punk rock cover songs: “Six Pack” and “New Rose”. The old punk fans in the crowd sang along too and the whole set was a good time.


Rights of the Accused (click thumbnails for full images)

In between bands, various “DJ’s” were playing some really great old industrial and Wax Trax label records while slides of photos of the old store, records and bands were shown against the back of the stage. It was a really nice touch.

Next up was En Esch, Guenter Schulz & Raymond Watts playing as KMFDM. Yes there was no Sasha and no the band didn’t suffer a bit for it. This version of KMFDM was infinitely better than the Sasha version that is around these days. They opened with “Don’t Blow Your Top” to the delight of the entire audience. En Esch looks exactly the same as he did 20 years ago and he pranced around the stage and delivered a rock-solid vocal performance and contributed to some electronics and guitars. The rest of the band put on a KMFDM clinic and the band played a set chock full of their greatest hits. Half way through the set Raymond Watts came out on stage to a big applause and they really got the crowd moving when they played “Juke Joint Jezebel”. The entire main floor was dancing as were many in the balcony. This was easily the best KMFDM performance of any incarnation of the band since before the Wax Trax label folded. The crowd easily got their money’s worth alone out of this set and the best was yet to come.

After more wonderful music supplied by the DJs and the stage was setup, Front 242 took the stage. There was some question about which Front 242 we would get, the incredible 1980’s/early 1990’s version that made some of the best industrial dance records ever, or the not so great later 1990s version who wore track suits and played some bad techno music (and would rework their older material to fit this mold). Thankfully the authentic version of Front 242 was the one we got and the band came out on stage and played their asses off. Richard 23, who had to have been one of the oldest band members to perform that evening danced and pranced around the stage and rarely stopped to catch his breath, all while singing his songs flawlessly. The band was playing their songs like it was 1989 again and blasted out hit after hit, all of it sounding incredible. They stuck to the best material that was mainly on the Wax Trax label and the crowd went nuts and danced themselves silly.

Highlights of their high-energy set included “Welcome to Paradise”, “Headhunter”, “No Shuffle”, “Tragedy For You” and just about anything from the mid to late 1980’s you can think of. They had graphics being displayed on screens behind them while playing and the stage was full of strobe and flashing lights. The sound was incredibly loud yet perfectly clear. Near the end of their set, Richard 23 gave a little speech to the crowd about how much Jim, Dannie, and Wax Trax meant to their band and how if it wasn’t for them, they would never have been able to enjoy the long career they have. It was very classy and very touching and was totally sincere.

The band played well over an hour and it was as perfect of a Front 242 show as you could ever have wanted, bringing an already amazing and special evening to a satisfying close. Everyone in the crowd looked extremely happy and you can hear people already talking about what a good show it was as they were lingering in the club, staying to dance for the after-show dance party, or making their way out of the club. It was an amazing evening and a wonderful tribute.